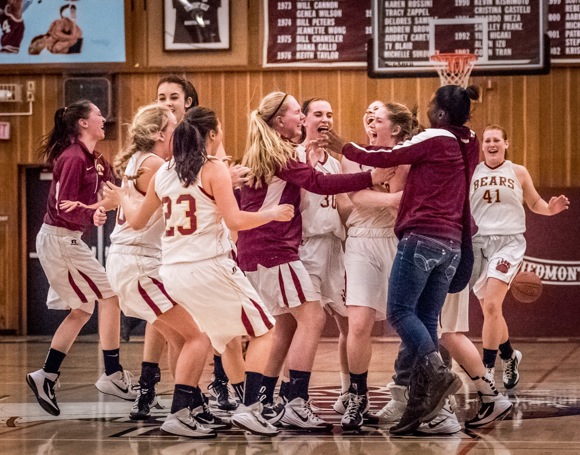 Update: M-A lost to North Salinas 53-60. The team automatically qualifies for the NorCal tournament; the first game will be Wednesday, time and location TBD.

The #2 seed Menlo-Atherton Varsity Girls Basketball team is playing #1 seed North Salinas for the CCS Division I Championship tonight (Saturday, March 7) at 6:00 pm at Santa Clara University. A victory will propel them to the CIF Nor-CAL playoffs.

After letting a 12 point lead at halftime and 9 point lead at the beginning of the fourth quarter slip away, the Lady Bears were victorious over Piedmont Hills High School in the CCS semifinals in overtime last Wednesday night. The final score was 55-52 and the celebration began, as shown by this great photo taken by InMenlo contributing photographer Irene Searles.