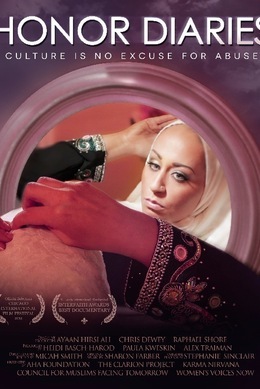 Honor Diaries is the first film to break the silence on ‘Honor Violence’ against women and girls. Our goal in screening this movie is to promote dialogue around this issue. By shedding light on these abuses and talking about them, we are on the path towards progress.

However, we need to get at least 77 more RSVPs by March 16, 2015, or else our event will be cancelled. We’re too close to let this screening fail! We can do it if you spread the word! Please help us raise awareness by sharing this story and the link.”

More information is on the Tubb page: “In male-dominated cultures, like Saudi Arabia, women and girls are treated like property,forced into marriage, and suffer female genital mutilation. For the first time on film, an international group of women’s rights champions breaks the silence on honor violence, in the groundbreaking documentary film Honor Diaries.

“[It] features an all-star cast of female human rights activists, including Ayaan Hirsi Ali. Together they courageously speak the truth, that culture is no excuse for abuse.”