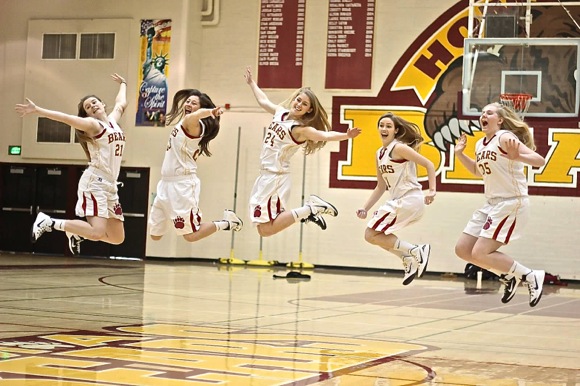 By making it to the CCS Championship game, the Menlo-Atherton Bears Girls’ basketball team was one of 32 teams selected for the State Championship Tournament. M-A drew the 11th seed in the Northern Division and traveled to 6th seed, James Logan, last week, ending their great season with a loss, 51-48.

The team bids farewell to its seniors — Naomi Baer, Erin Goode, Sarah Howell, Maddy Kim, and Carolyn Watson — who showed outstanding leadership and character. We asked them to reflect on their milestone year:

Naomi Baer
“Playing basketball throughout high school has been such an unbelievable experience. I’ve played with one of my teammates since 3rd grade and three of the other seniors since middle school, and each year we’ve become closer friends and better teammates. In addition to the obvious dribbling, shooting and basketball skills, I learned how to be a leader and become family with people I likely would never have met without basketball. I also learned how to (or somewhat attempt to) manage schoolwork with 2.5 hours of evening practice everyday. Because of my unforgettable high school experience with basketball, I also look forward to playing at Pomona College next year!”

Erin Goode
“This season has been the best season I have ever had in my basketball career. I could not have asked for a better team or teammates. I think our team chemistry made all the difference in every close game, big games and practice. I learned so much from both Coach Kish [Markisha Coleman] and Coach Hayley [Hayley Grossman] and from all my teammates as well. I hope to coach in the future and I will definitely take away what I have learned from this season to teach others in the future. Despite ending on a loss this season, I am proud of the way we ended the season and how we challenged every team we played.”

Sarah Howell
I have treasured every year of M-A basketball. I am sad to leave my teammates as I head off to college, but I am grateful for the experiences I have had with them and my coaches. I never could have imagined that our team would be playing for a CCS championship during my senior year. The team has challenged me to grow as a basketball player and a leader and I am thrilled to carry these skills with me as I begin my life outside of Menlo Park.”

Maddy Kim
This season was truly the best of all four years at Menlo-Atherton High School. The team was all very tight knit, and I believe that the cohesion and amazing team dynamic played a huge role in our success this season. I also have to give a lot of credit to our amazing coaching staff. They pushed us harder than any of us thought we could take. However, we all know it was done with love and the hard work was shown on the court when push came to shove. I hope to play basketball in college, but I must say, I will very much miss this team. This was a great way to end my high school basketball career.

Carolyn Watson
This final season has been an awesome way to conclude my Menlo-Atherton basketball experience. We had a great team chemistry and I became closer with the previous players and friends with the new freshmen. It was amazing to finish the season with a CCS Championship game because, even though we lost, it was an achievement to prove to everyone that we could get that far. I couldn’t have asked for better teammates to play, practice, work hard, and laugh with on and off the court. I’m sad to be leaving but excited to see the future of the program. I’ll definitely continue playing basketball by way of club or intramural sports in college.