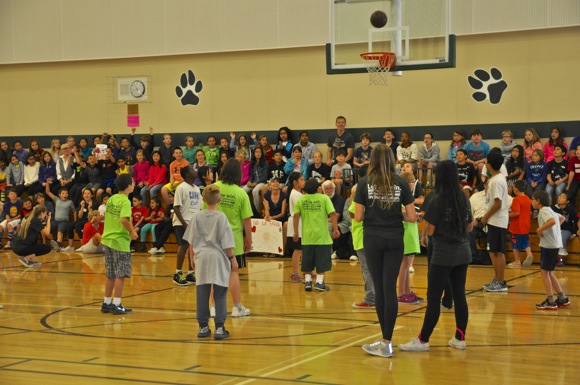 After a weekend of NCAA Sweet Sixteen and Elite Eight college ball, La Entrada Middle School in Menlo Park kept the ball bouncing today by hosting a Special Olympics basketball tournament. And the cheers that emanated from the packed gym could be heard a block away, such was the enthusiasm for the event.

This is the fifth time La Entrada has hosted the tournament, although it’s the first time the school has entered its own team, along with a team from the same district, Las Lomitas Elementary School. Five other Bay Area middle schools — Cunha, Corte Madera, Terman, Jordan, and Kennedy — participated in the event. 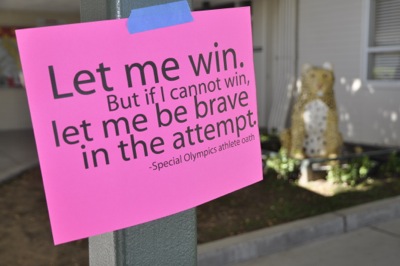 Opening Ceremonies featured the Special Olympics Athlete’s Oath: “Let me win, but if I cannot win, let me be brave in the attempt.” The tournament featured four games, lunch, and skills training stations for athletes between games. The day culminated with a trip through the “Tunnel of Awesomeness,” an awards ceremony, and team photo gifts.

Kim Kuczon, La Entrada P.E. Teacher, and Theo Paat, Special Olympics Coordinator, organized the event with the help of 26 La Entrada student volunteers who worked with the student athletes as team managers, photographers, greeters, scorekeepers, spirit leaders and referees. Student volunteers were selected based on a written essay sharing why they wanted to participate in the event. However, the entire La Entrada school got involved in the event by making posters and cheering on the athletes.

The La Entrada PTA supported the tournament by providing t-shirts for the La Entrada athletes and student volunteers, balloon decorations, water for the athletes, coffee for the adults, and, of course, volunteering their time.

Summed up Kim Kuczon: “It is a truly unique and special day that impacts the lives of everyone that is involved.”