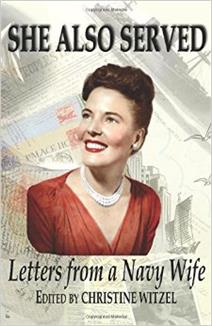 What was daily life like for a Navy officer’s wife in Menlo Park during World War II? In China amid civil war? In London and Continental Europe during the Cold War? Virgilia Short Witzel brought the World War II era to life through her letters, now collected by her daughter Christine.

That life and resulting book will be topic of next Menlo Park Library Saturday event on April 4 from 11:00 am to Noon. It will take place in the City Council Chambers, 701 Laurel Street.

During World War II, Virgilia Short Witzel, a young mother and Navy officer’s wife, grappled on the home front in Menlo Park with wartime rationing, shortages & loneliness. During the ensuing Cold War, she experienced adventure and misadventure overseas. Living in opulence in China while surrounded by poverty, she was forced to evacuate in a rush as the Communists took over.

In the early 1950s, she moved to London, enjoying celebrity-studded receptions, including tea at Buckingham Palace, while her daughter Christine attended kindergarten and acquired an English accent and a taste for travel.

After her mother’s death at nearly 95 in 2004, Christine was overwhelmed by the boxes of letters, stashed away in the family’s Menlo Park home. Over the course of half-a-dozen years, she compiled the most entertaining and historically interesting selections, augmenting them with newspaper clippings, an appendix of world events and her own reflections. The result is She Also Served: Letters from a Navy Wife.

The event is free, and refreshments will be provided, courtesy of the Friends of the Menlo Park Library. Free wheelchair accessible van service is available for Menlo Park area seniors and people with disabilities. Call 330-2512 for van reservations.