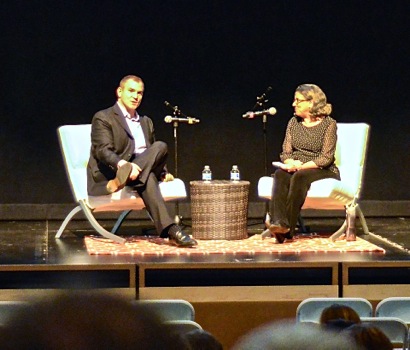 Frank Bruni, New York Times columnist and bestselling author, spoke at Menlo-Atherton High School last week, sharing his thoughts on the college admission process and the conversation surrounding it. His newest book, Where You Go Is Not Who You’ll Be, highlights the importance of picking a school based on the characteristics of the school itself, not it’s “brand name” or it’s selectivity. Selectiveness and exclusiveness, Bruni maintained, do not denote quality.

During the talk, Bruni and Alice Kleeman, M-A’s college counselor, answered a variety of questions regarding college admissions. Audience members were encouraged to write down questions for Kleeman and Bruni to answer.

Among other topics discussed, Bruni and Kleeman agreed that in order to change the seemingly flawed college admission process, the conversation surrounding it must change. Bruni suggested making the conversation broader and more truthful, as well as emphasizing that there are many paths to success. To challenge the pre-existing notion that only certain schools provide the foundation for success, he posed the question: Was it the school itself or a person’s privileged upbringing that brought them success?

This issue of correlation and causation, as Bruni called it, also translates into the media’s status conscience style of profiling successful celebrities and politicians. Bruni cited a number of instances in which the media attributed one’s success to their highly selective college. However, as Bruni put it, “Ivies [Ivy Leagues] do not explain it all.”

Instead of choosing a college based on how a much it’s name will impress people, Bruni advised prospective students to base their decision on which school will introduce them to new people, challenge pre-existing presumptions and broaden their horizons. In addition, Bruni suggested that parents urge their children to excel and strive for excellence, but not for the soul purpose of impressing colleges.

In his book, he stresses that there is “no prescription for success or contentment.” Rather, one’s drive, passion and social nimbleness will pave the way to success more than any Ivy League college. Bruni concluded by saying that certain characteristics that contribute to success, such as the ability to turn on a dime, are not learned at a college with a 10% acceptance rate.

As part of the M-A Parent Education Series, Frank Bruni’s talk was overwhelmingly successful and was one of the most sought after events in M-A’s history.

If you would like to sign up for the next event in the series, “Helping Young Athletes Reach Their Potential: What Does Research Tell Us?” you can register at http://athletepotential2015ma.eventbrite.com.