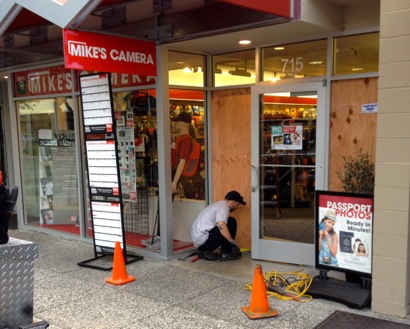 This morning, for the second time in less than a week, thieves smashed the front window of Mike’s Camera on Santa Cruz Avenue in downtown Menlo Park to gain entry and burglarize the store. The broken windows were being boarded up as people came to work in SCA shops and offices.

This is the third break in at Mike’s in a six-week period.  On March 22, a car rammed through the rear entrance.

Other camera stores on the Peninsula have experienced similar “smash and grabs.”

Police ask anyone who might have information about this case, and/or who witnessed this incident, to call the Menlo Park Police Department at 650-330-6300 or the department’s anonymous tip hotline at 650-330-6395.