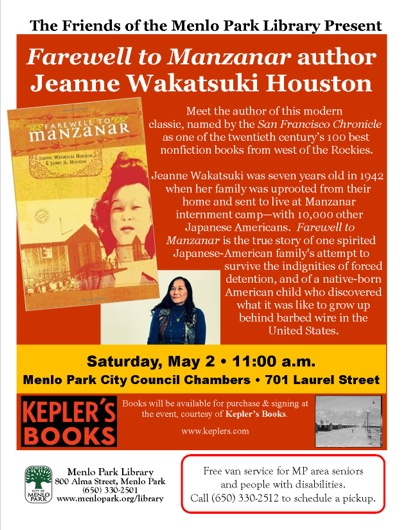 Jeanne Wakatsuki Houston, author of the classic memoir Farewell to Manzanar describing her family’s time living in a California concentration camp for Japanese-Americans in the wake of the December 1941 bombing of Pearl Harbor, will speak at a special author event hosted by the Menlo Park Library.

Jeanne Wakatsuki was only seven years old in 1942 when she and her family were forcibly uprooted from their home and sent to live at the Manzanar concentration camp. Twenty-five years after her family’s release, Wakatsuki Houston and husband James Houston published her memories from that period in the book they co-wrote, Farewell to Manzanar.

The book won the attention of critics nationwide, bringing to the public eye the story of the Japanese-American experience during World War II. Four decades after its initial publication, the book is a curriculum staple, and was named by the San Francisco Chronicle as one of the twentieth century’s 100 best nonfiction books from west of the Rockies.

The Menlo Park Library will host a talk and book-signing with Jeanne Wakatsuki Houston on Saturday, May 2 at 11:00 a.m. at the Menlo Park City Council Chambers, located at 701 Laurel Street in Menlo Park. This special author event is free and open to the public, and is funded by donations to the Friends of the Menlo Park Library. Books will be available for sale & signing at the event, courtesy of Kepler’s Books of Menlo Park.