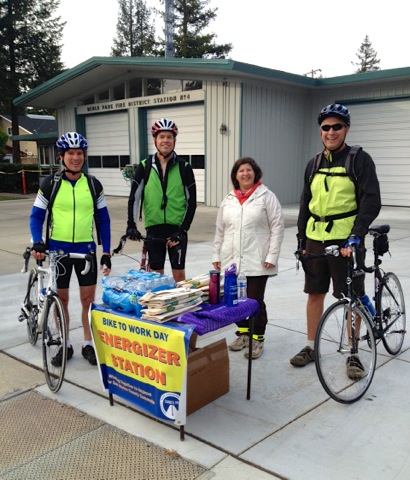 The rain predicted for today appears to be holding off during the morning commute — agood thing for those folks who are choosing pedal power to get to their jobs as part of Bike to Work Day 2015 sponsored by the Silicon Valley Bicycle Coalition.

Menlo Park resident Gudrun Enger snapped this photo at the energizer station she hosted at the corner of Alameda de las Pulgas and Valparaiso. Pictured are Gudrun’s neighbor Robin Cohen and three cyclists on their way to the same company in Cupertino.

Other Menlo Park stations are located at the north and southbound platforms at the Caltrain station; the bike bridges at Ringwood & Pierce Rd. Willow Place, Alma, and San Mateo Drive; SLAC National Accelerator Laboratory; 4100 Bohannon Drive, Willow Rd. & O’Brien Dr., and at the Facebook campus near the Thumbs up sign.