Star and stripes out in Menlo Park on Flag Day 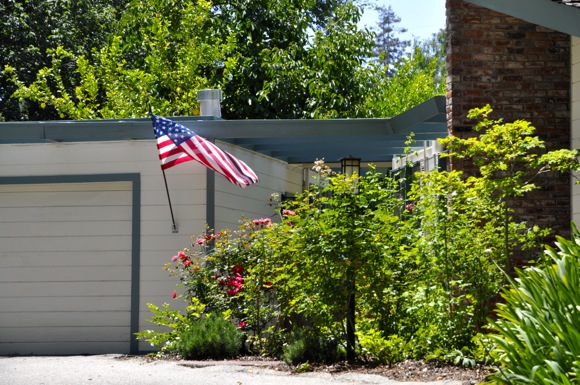 If you’re looking for an afternoon stroll, you could go on a flag counting stroll through west Menlo Park. We counted a dozen or so spread out over a couple mile radius. Most are standard size flags hung from poles attached to porch or driveway. But in the case of Bill Russ’s house on Cotton, the display includes four dozen or so small flags on the perimeter of his front yard.

Curious about what Flag Day is all about? Here’s the background, according to the National Flag Day Foundation:

“The ‘Stars and Stripes’, the official National symbol of the United States of America was authorized by congress on that Saturday of June 14, 1777 in the fifth item of the days agenda. The entry in the journal of the Continental Congress 1774-1789 Vol. Vlll 1777 reads “Resolved that the flag of the thirteen United States be Thirteen stripes alternate red and white: that the union be thirteen stars, white in a blue field, representing a new constellation.

“In Waubeka, Wisconsin, in 1885 Bernard John Cigrand a 19-year-old school teacher in a one room school placed a 10” 38 star flag in an inkwell and had his students write essays on what the flag meant to them. He called June 14th the flag’s birthday. Stony Hill School is now a historical site. From that day on Bernard J. Cigrand dedicated himself to inspire not only his students but also all Americans in the real meaning and majesty of our flag.”