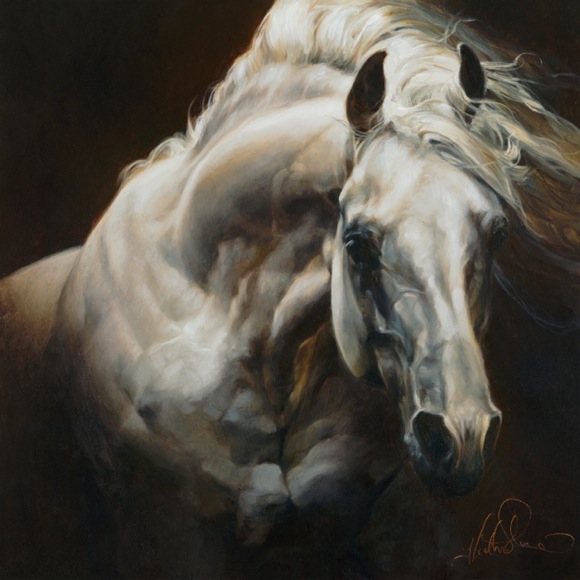 Members of the Menlo Charity Horse Show Committee announced that Heather Theurer of Las Vegas will be the Official Artist for the 45th anniversary of the nationally-honored equestrian competition. Ms. Theurer’s work, titled Equus Series l:ll, is painted in oils on board, in the tradition of the Renaissance Masters with upwards of 20 layers of glazing.

Valued at $2,625, the painting will be auctioned off Friday night, August 7th, at the Gala Dinner immediately following the Bentley San Francisco & Los Gatos $40,000 Grand Prix jumping class. Reproductions of the work will be featured on the event’s mugs, posters, invitations, stationery and web site.

Heather Theurer is a well known artist who has exhibited at shows and venues across the country. She has also been among the artists awarded at several local and international competitions. Additionally, she is a licensed artist with Disney Fine Art, and several of her Disney-inspired paintings have been made available at Disney galleries across the U.S. and at Disney Theme Parks.The artist will be attending the event, and other pieces of her art will be on display and for sale during the horse show.

“I think I’ve always loved horses, more so than any other creature,” she said. “There’s something intoxicating about them that exudes power, strength and attitude. Yet it is tempered by an almost childlike submission and gentle intellect.”

Co-chair and founder of the event, Betsy Glikbarg of Atherton commented, “We are delighted that Heather Theurer will be helping us celebrate the 45th anniversary of this traditional event. Her art truly portrays the elegance, beauty and power of the horse.”

The 45th annual Menlo Charity Horse Show will take place August 4th through August 9th at The Menlo Circus Club, 190 Park Lane in Atherton. Over 500 of the finest horses and riders in the U.S., Canada and Mexico are expected to compete in non-stop, challenging events in three arenas.

Once again, the event will benefit Vista Center for the Blind & Visually Impaired which serves thousands of clients in San Mateo, Santa Cruz, San Benito and Santa Clara Counties. Through the years of their collaboration, the horse show has raised over $6 million for The Center.