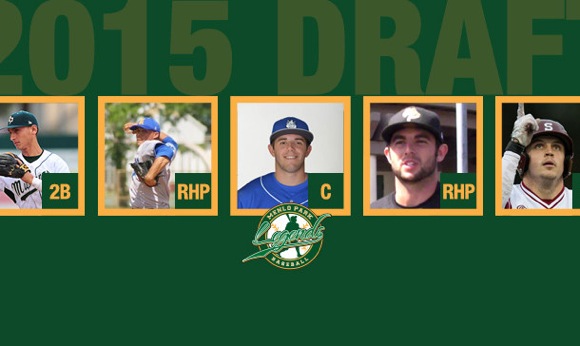 As the current Menlo Park Legends team is in the midst of this season, former players are about to start their own in the big leagues.

Five former Legends have recently been drafted into Major League Baseball. They all showed great potential for professional baseball while they played summer ball with the Legends.

After the 2015 MLB draft results, General Manager, David Klein, was excited to see his former Legends players take their skills to their professional teams. “It is very satisfying to see players accomplish their goals to become professional baseball players,” he said.

Drafted Player Mark Mathias: While attending Cal Poly San Luis Obispo, infielder Mark Mathias joined the Legends for the 2014 season. Shortly into the season, Team USA selected Mathias for their team. “It was clear that Mark was going to start in the next level,” Klein said. “He was extremely focused and process oriented about the game.”

Although the Legends were only able to have Mathias play for a short time, they understood that Team USA was another great opportunity. This year, the Cleveland Indians drafted Mathias in the third round, 93rd overall.

Drafted player Tyler Cyr: Tyler Cyr was a power pitcher in the 2014 Season from Embry-Riddle Aeronautical University; also attended by current Legends Kyle Zirbes and Tobias Moreno. Cyr was drafted in the 10th round by the San Francisco Giants.

During the 2014 season, Cyr had a 0 ERA, pitching 10.33 innings with 10 strikeouts. He was known for getting the Legends team out of tough situations.

Drafted Player Zac Grotz: Also out of Embry-Riddle Aeronautical University was pitcher, Zac Grotz from the 2014 Legends season. Grotz was drafted in the 28th round by the Houston Astros. While on the Legends, he pitched 40 innings and had a 3.38 ERA.

“What a crafty right-handed pitcher with pin point accuracy,” Klein said. “He had great composure on the mound and was capable of handling any situation.

Drafted Player Zach Hoffpauir: The Arizona Diamondbacks drafted former 2013 Legend, Zach Hoffpauir, in the 23rd round. Not only was Hoffpauir a stellar player on the field, but was also a star safety for the Stanford Football team.

“He was a spark plug,” Klein said. “In every play, the ball exploded off his bat.”
Klein considers Hoffpauir to be one of the best athletes that he has coached. The outfielder’s great hand speed highly impacted the team’s success on the field.

Drafted Player Colton Frabasilio: From St. Louis University, Colton Frabasilio was a solid catcher in the 2014 Legend season. He is the third catcher from the Legends to go into the MLB. The Kansas City Royals drafted Frabasilio in the 23rd round. Frabasilio’s power stroke will help him compete in the next level.