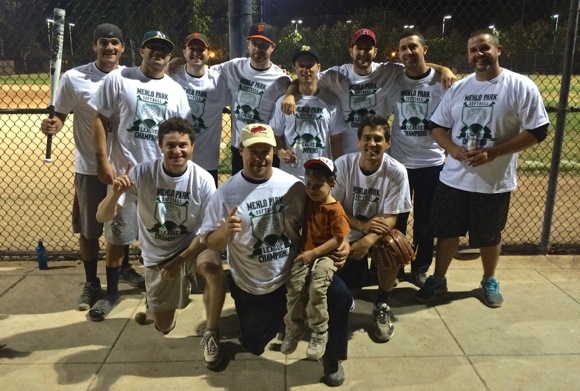 The Oasis team was the winner of this year’s Men’s Softball D League in Menlo Park, a program of the city’s Parks and Recreation Department.

The D League is made up of intermediate to competitive players — most have played organized ball from Little League to high school with a few having competed in college. The season is 10 games/weeks with one night of playoffs for the four top teams. Games, played Thursday nights (three games each night), are 70 minutes in length.

“‘I’ve been managing a men’s adult softball team now for about 20 years either in Palo Alto (12 years), Mountain View (5 years) and now Menlo Park going on three years,” said Oasis manager and Menlo Park resident Steve Robe. “I love to play. It’s great recreation, a good way to exercise, and I also get to know people.”

Any team can apply and play if there is room in the various league levels. This year there were eight teams in the D League. Information about registering is available on the City of Menlo Park’s website.

Others on team not pictured: Adam Schneberger, Joe Wagstaffe, and Brett Moore