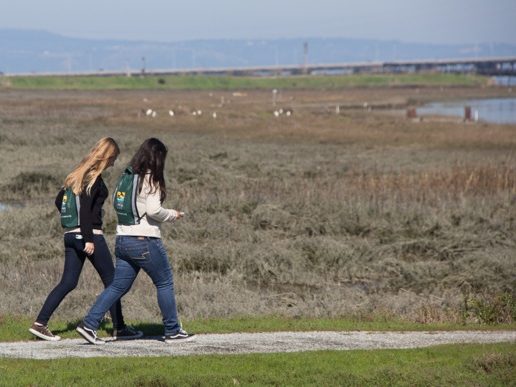 The San Mateo County Board of Supervisors awarded Midpeninsula Regional Open Space District (Midpen) a $1,000,000 Measure A grant to design, engineer, obtain permits, and build a critical 0.6-mile section of the San Francisco Bay Trail in the next two years. The trail will provide residents of the Belle Haven neighborhood of Menlo Park  and East Palo Alto access to Ravenswood Open Space Preserve and Cooley Landing.

“We’re very pleased that in a few short years, we’ll be able to offer residents of the southern part of the County direct access to one of the nation’s premier trail systems and a wonderful nature destination right in their backyard,” said Steve Abbors, Midpen General Manager.

The project area is located between Midpen’s Ravenswood Open Space Preserve and University Avenue, along the boundary between the cities of Menlo Park and East Palo Alto. The County, Midpen, and the two cities have been working diligently to fill this gap for the last 10 years.

Some of the challenges have been a nearby railroad line that could be activated in the future, salt pond restoration projects, Hetch Hetchy water pipes, multiple jurisdictions and property owners, wetlands and habitat protections, and the required clean up of a former gun club. To complete the project, the Board of Supervisors authorized the use of up to $1 million in the County’s Measure A funds.

While matching funds were not a grant requirement, at its July 22, 2015 meeting, the Midpeninsula Regional Open Space District’s board of directors agreed to leverage Measure AA funds toward this project and unanimously voted for a resolution to enter into this funding agreement. The Ravenswood Bay Trail was part of its project list when the voters approved Midpen’s Measure AA in 2014.

The San Francisco Bay Trail is a regional trail whose completion relies on the continued collaboration among shoreline property owners, cities, local governments, nonprofits, advocates and regional, state and federal agencies with jurisdiction over the trail alignment. Today, the trail is approximately 338 miles long and passes through 47 cities. When complete, it will be 500-miles long and will encircle the San Francisco and San Pablo Bays.