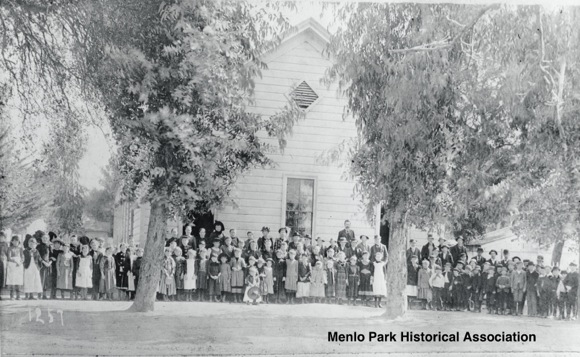 A new mini-exhibit with photos and other items chronicling Menlo Park schools from 1875 to 1927 is featured in the Menlo Park Library’s downstairs display case through October 30th.

What is the significance of these dates? In the 19th century, the name Menlo Park was used for essentially all the area between Redwood City and the San Francisquito Creek east of Canada Road, and, in fact, most of this area was temporarily incorporated in 1874 as the City of Menlo Park.

The first public schools were organized under the Redwood City School District (reorganized in 1861 to include Menlo Park). The first school in Menlo Park (1872) was in St. Bridgit’s Catholic Church (now Nativity), then located on Middlefield Road opposite Ravenswood Ave., thus in today’s Atherton.

Two years later a dedicated school building was opened on Gilbert Ave. near Nova Lane on land donated by Col. McKendry. This area, not annexed by the City until after World War II, eventually became part of the Ravenswood City School District (organized in 1892).

So 1875 was the year the first school (top photo) opened in what was to become the original one-square mile of land in the 1927 incorporation of the City of Menlo Park. It was located on the corner of Oak Grove Ave. and Crane St. 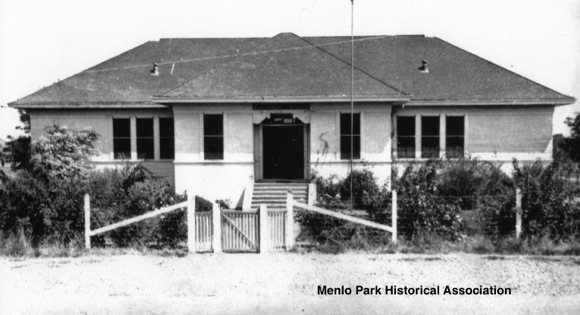 Soon after, the Menlo Park City School District (MPCSD) was formed (1880) covering part of today’s City of Menlo Park as well as part of the Town of Atherton. When Stanford University opened, the MPCSD opened a beautiful new grammar school (1892) on the northeast side of El Camino Real near Glenwood Ave. It was known as the Central School.

Unfortunately, in 1912 it was destroyed by fire. While a new Central School was being built on the same site, the students were taught in the Presbyterian Church, which was then on Santa Cruz Ave near Chestnut St.

The second Central School was not demolished until 1963, but in 1927, the year Menlo Park incorporated, a second elementary school was opened by MPCSD, Fremont School, on Middle Ave. where today Rosener House is located.