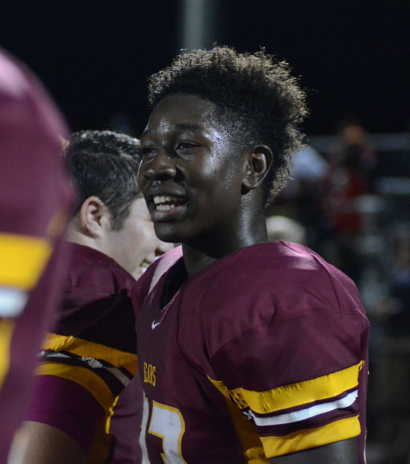 The San Francisco 49ers High School Player of the Week Award for week 7 goes to Jordan Mims of Menlo-Atherton High School. The Junior running back had a night for the record books in M-A’s 31-10 conference win over Aragon.

Mims rushed for an astounding 321 yards – marking a new record for the Menlo-Atherton program. He now holds the M-A rushing record, and has the record for the most single game all-purposed yards.

“He had two touchdowns called back; he almost had 450 yards rushing. The kid is incredible,” praised Menlo-Atherton Head Coach Adhir Ravipati.

The gifted tailback is also the PAL Bay Division rushing leader with 830 yards on the season.

The offense started and finished with Mims Friday night. He wasted no time. Mims scored on a 51-yard run on M-A’s opening play of the game. From the first offensive series on, he never looked back, scoring four touchdowns by the end of the night. The speedy tailback rushed for three and caught one off a 25-yard pass from M-A quarterback Miles Conrad.

Once Mims got started there was no slowing him down. He consistently broke off huge gainers, scoring on runs of 72 and 68 yards, after his initial 51-yard touchdown to open the game. The junior running back was responsible for all of Menlo-Atherton’s points, with the exception of a 31-yard Dylan Calderon field goal.

Though Jordan Mims scored all the touchdowns in Friday night’s match-up, he refuses to accept the much deserved credit for himself.

“He is a remarkably humble kid. He deflects the credit to everyone else and constantly praises the blocking he receives and the play of his offensive line,” said Coach Ravipati, who couldn’t speak highly enough about his running back.

“He works hard at practice, and his school work, and in the community… In terms of what we want in our kids and our program, he embodies it all and does everything we want out of kids at a very high level,” said Coach Ravipati. “He is genuinely a really humble kid and an incredibly talented football player.”

As much of an all-star Mims is on the football field, now holding more than one M-A record, he is also an accomplished track star at an elite level. Mims qualified for the Junior Olympics in North Carolina his sophomore year where he ran a 53-second 400-yard dash. Clearly his incredible speed and track skills transition just fine to the football field.

Mims was also a member of the M-A basketball team his freshman and sophomore year, managing to be a competitive three sport athlete.

He is an incredible athlete, clearly, but Mims also excels in the classroom and in the community. He currently holds a 3.1 GPA this quarter.

“Jordan is a model citizen in everything he does. He is a polite kid, works hard, and does all the right things no matter what the platform may be. All the teachers and staff love him,” said Coach Ravipati.

Above all, he is a big brother. And that role may be the one he is best at whether the young man realizes it or not. Mims has two younger brothers and it is evident to his coaches the emphasis he puts on this responsibility, as he is always supporting the younger kids around him.

Jordan Mims has played a major role in Menlo-Atherton’s rebound from their 0-3 start and has M-A heading in the right direction, now 3-3.

As the home school of the 49ers High School Player of the Week, Menlo-Atherton High School will receive a $500 grant for their football program from the 49ers Foundation. Jordan Mims will receive two tickets to a 49ers home game and a certificate signed by 49ers head coach Jim Tomsula. At the end of the season, Mims will be invited to the SAP Performance Facility to accept a trophy recognizing his achievements.

Alyssa Kelly writes about youth sports for the San Francisco 49ers; this article originally appeared on 49ers.com; used with permission