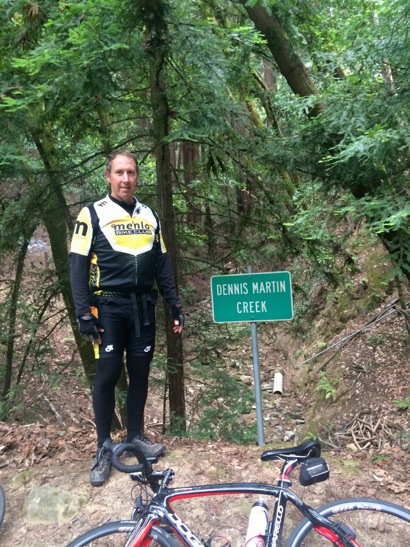 It is only fitting that the full story of Menlo Park’s first resident, Dennis Martin, should have been unearthed (so to speak) by ultra-local resident Bo Crane. Bo was born in the old Palo Alto Hospital (now Hoover Pavilion) and was baptized at Holy Trinity Church on Pine near Ravenswood a few years before the chapel was reborn on Crane Street (what a coincidence) as the Nativity of the Holy Virgin Church.

Bo got intrigued with the story of Dennis Martin several years ago. Dennis Martin was a member of the first wagon train (1844) to cross the Sierra Nevada into California. He quickly acquired property between Sand Hill Road and the San Francisquito Creek, where he constructed a sawmill as well as a house and a church. Later he lost his property and died a pauper.

Bo is an avid biker, member of the Menlo Bike Club, and a regular contributor to Cycle California magazine. In 2005, he plotted the course for what has become the Menlo Park Rotary Club’s annual fundraiser, called the Tour de Menlo. In the accompanying photo, Bo has stopped at the bottom of Old La Honda Road at Dennis Martin Creek, which flows through the Thornewood Open Space Preserve.