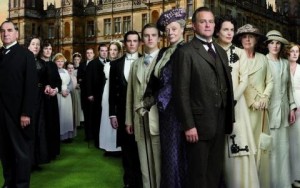 Fans of the hit PBS Masterpiece series Downton Abbey as well as people interested in England’s Edwardian Era are invited to “Downton Abbey: The Music & the Era,” a free interactive presentation on Tuesday, December 1, at the Menlo Park Library at 7:00 pm.

To avid followers of the Edwardian era on both sides of the Atlantic, Downton Abbey has become a not-to-be-missed television event. Since its inception in 2010, public fascination with the portrayal of life and love in an historic, but fictional, English country house has snowballed, especially after PBS acquired the first series for broadcasting in 2011 as part of its ‘Masterpiece’ series. It is currently PBS’s highest rated drama in four decades.

Presenter Dulais Rhys will give event attendees a look at the music of Downton Abbey within the context of the Edwardian period (beginning of the 20th century) including references via slideshow and audio examples of the era’s arts, social developments, technical innovations, historical events and retrospective perceptions. The popular music of the period as well as television period drama theme tunes will also be discussed, and audience participation is heartily encouraged.

Dulais Rhys is a professional musician based in San Francisco. He holds bachelor’s, master’s and doctorate degrees in music from the University of Wales as well as several teaching diplomas.