There are houses that cheer as you walk or drive by and such was the case on San Mateo Drive where Becky and Tom McDonough lived in the house he’d grown up in. InMenlo contributors Jym Clendenin and Frances Freyberg captured the spirit of the house — and its colorful paint job — in a March, 2014 post. (Frances’ photo is at bottom of this post.)

The McDonoughs put the house, which was built in 1941, up for sale when they moved to the Pacific Northwest, the first time it had been on the market. The quarter acre property also included a a 1/bath, 1/bedroom guest house. It sold in January for $2,751,000, a couple hundred thousand dollars over the asking price of $2,498,000.

Now it is no more, like many other ranch-style houses that get purchased nowadays in Menlo Park. As someone who grew up in one of those ranch-style houses herself (still standing), we could wax on about the “changing character of Menlo Park,” but we realize change does happen. Let others decided it if is progress — to not. 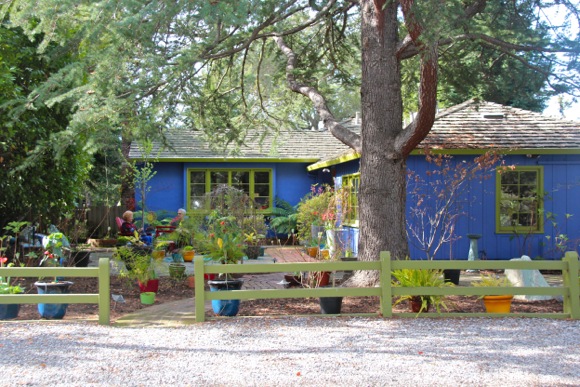 Photo of lot where house once stood by Jym Clendenin