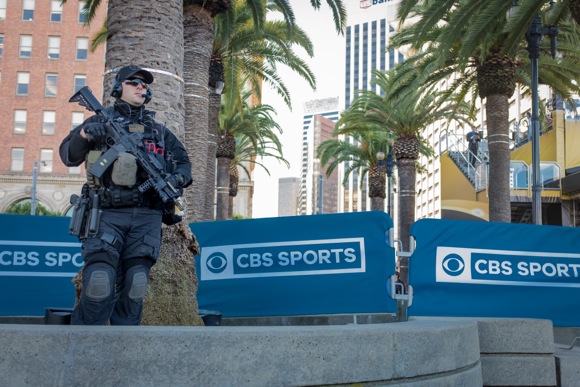 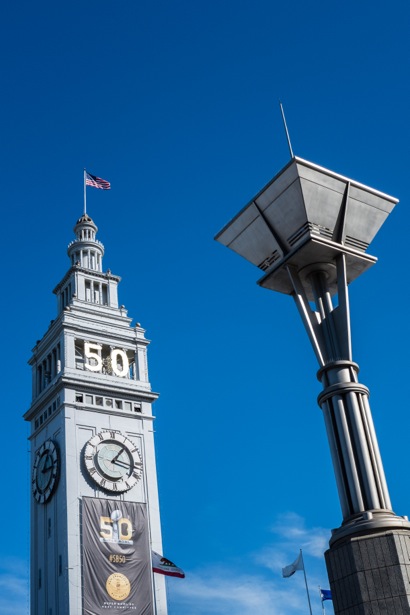 For the non-football fan among the group of InMenlo contributors who made their way to the City yesterday to see a photo exhibit and visit Super Bowl City, the question was logical: “If the Super Bowl is in Santa Clara, why is all of this going on in San Francisco?” Details, details. As is the case when a City is awarded a Super Bowl even though its current football stadium — Levi’s — is nearly 50 miles south (measured from Market and Embarcadero).

Indeed, there were a lot more 49er jerseys on display yesterday than Bronco or Panther wear. We’re guessing those fans don’t come in until the end of the week. (If, indeed, regular fans can make the trip, given the prices of almost everything associated with the event.) 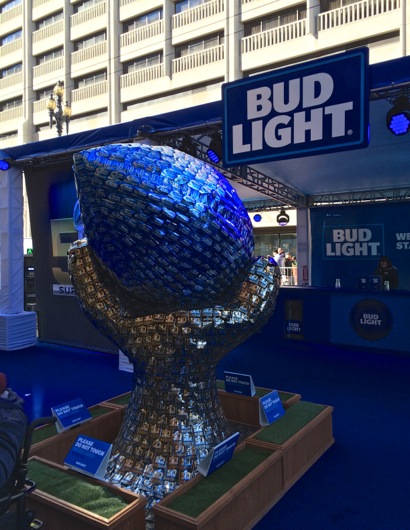 Is the free Super Bowl City worth a trip north? Our take: it’s a kind of goofy fun in the sense, as a local, you know how the area around and near Justin Herman Plaza usually looks, and it’s a bit awe-inspiring to see how it’s been transformed with broadcast booths, stages, portable buildings, bars, and eateries.

Easily our biggest surprise undoubtedly was the number of fully-armed San Francisco Police Department personnel. As one our group stated, “I hope they’ve gotten training on all of those weapons.”

As promised, lots of interactive stuff to do, just be prepared to stand in line to take part (and to venture into the corporate-sponsored buildings as well). These lines weren’t particularly long mid-week during the day, but we’re guessing they get longer afterwork and certainly on the weekend. 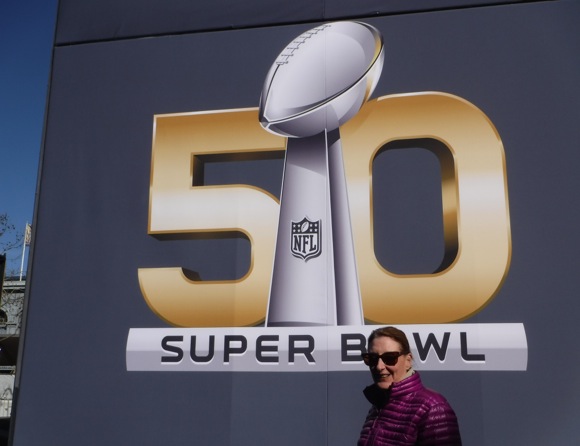 We’re also guessing, given the plethora of bars, that times get “happier” as the day goes on.

A pastime that can be easily enjoyed by all is posing for photographs amidst the various Super Bowl 50 signs. Really, how often can your head take the place of “o” in Super Bowl?

Top photo of SFPD near CBS sports  and photo of Ferry Building by Irene Searles; Super Bowl trophy made of BudLight beer cans by Linda Hubbard; visitor in front of Super Bowl 50 sign by Dennis Nugent