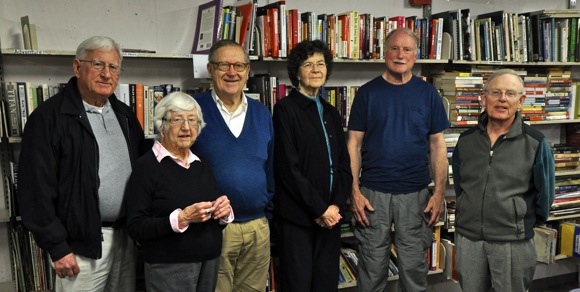 We’d gathered at the Menlo Park Library with some friends. Make that Friends, the volunteer organization that, among other duties, processes over 200,000 books a year in an effort to raise money for the library. They’ve done a good job: in the past 30 years they’ve raised over $2 million to support events, collections and services.

What the Friends need, they say, is more of them. “We’re asking for a commitment of three to four hours a week and a minimum commitment of six months,” said volunteer coordinator Henry Lesser. “The qualifications are a love for books and dedication to the library. Maybe there are parents of youth and teens who use the library who would be interested. And, of course, retirees.”

The Friends who were gathered round the table are all long serving, with Aldora Lee being the longest. “Initially, I reached out to the librarians when I was getting a second Masters degree at Stanford,” she recalled. “I was creating a learning model on the computer and got involved in teaching how to use the card catalog. It was using new technology to teach a system on its way out.

“After finishing with school, I was working and got recruited to serve on the Library Commission. And then I became a Friend.”

The Commission was Friend Tim Goode’s route to volunteering as well. “From the very beginning there was camaraderie,” he said. “People were ready to laugh and share. Being there with people and the books we love with the idea of raising money for the Library’s program made it all easy.”

Bill Harris claims that for 40 years, his wife had a “stealth program pricing books.” “I was working and didn’t pay much attention,” he recalled. “Then one year I showed up to help set up tables for a book sale. I did it again the next year and been doing it ever since.”

Like Bill, Wayne Bonde got involved initially with the book sale. “They needed someone to move the books from the basement to the outside,” he said. “Then I got involved drafting some governance procedures, utilizing my background as a CPA.”

In the case of Friend Jackie Drew, she just traded places. “I worked on the library desk as a staff member,” she said. “I retired, and two days later became a volunteer!”

The Friends are specifically interested in attracting new volunteers to help with the quarterly book sales, staff the library lobby bookstore, work on the Amazon bookstore, process donated books and volunteer at special events. If interested, email info@friendsmpl.org or call (650) 330-2521.