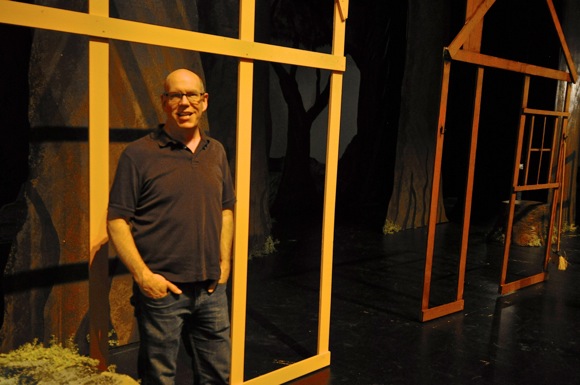 If you’ve had the good fortune to attend a performance at the Performing Arts Center at Menlo-Atherton High School, it shouldn’t surprise you that behind the scenes there is a technical director. Such a person is a necessity at the facility, which rivals many professional venues.

We stopped by and visited with Andy Hayes, who’s held that position at PAC for the last four years. He’s spent the past few months working with students on the school’s current production, Into The Woods, which will premiere on Friday night, Feb. 26, with subsequent performances on February 27 and March 3-5. The Stephen Sondheim musical features familiar characters in a lyrically rich re-telling of classic Brothers Grimm fables. Tickets are available at the door or online.

Andy is quick to give credit to English/drama teacher Alison Sundstrom who he collaborated with on the sets. “We are limited by budget, so it’s a bit of a hodgepodge of design,” he said. “The ballet had left over some styrofoam, and we turned it into a stump. The fashion show had left some plywood, which we used for the Rapunzel tower.”

About 15 students, who are taking a stage craft class, are involved in the production. “They do the work, under our direction” he said. “You start a project and are never sure how it’s going to turn out.

“For example, we had students stamping leaves on a backdrop, and I was worried about how it would look. But it turned out better than one I had done!”

Andy studied computer science in college and “stumbled into theater,” working for many years with the Palo Alto Children’s Theater.

“The computer science does help me with the analytic stuff,” he said. “This is a very sophisticated venue. Turning on a mike is non-trivial.

“But on the other hand, what we’re doing is really old school. It’s very physical and labor intensive.

“The kids love being on crew. And they own it 100%. I’m here just to make sure everything is safe.”