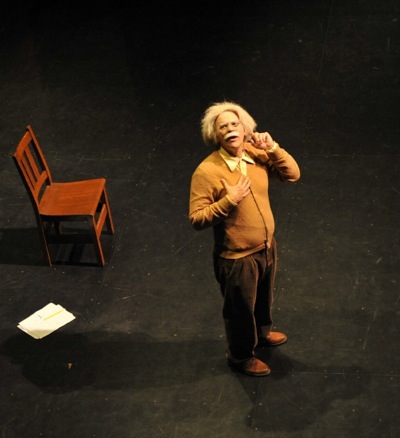 Want an introduction to theoretical physics from Albert Einstein himself? The Menlo Park Library invites you to experience “The Relativity of Einstein” on March 5, as actor Duffy Hudson brings everyone’s favorite theoretical physicist to life.

In his one-man show, Hudson embodies Albert Einstein’s brilliance, wisdom and humor, managing to “convey the essence of special and general relativity in under an hour.”

To prepare his Einstein performance piece, Hudson he says he ensconced himself in his home for a month, “armed with two dozen biographies, several physics text books, an online course on relativity, and the German accent in a cassette tape… I vowed not to leave the house until the show was ready.”

Hudson is an actor, director, writer, teacher and filmmaker who attended the Circle in the Square Theatre School in New York before moving on to perform in several Broadway productions.

Now based in Los Angeles, he has his own film company and is much-lauded for his one-man touring productions. The Menlo Park Library previously hosted Hudson performing a one-man A Christmas Carol, a selection of Dr. Seuss works, and in the guise of George Burns.

The March 5 event is free, thanks to funding by the Friends of the Menlo Park Library. No preregistration is necessary to attend. It will take place on Saturday, March 5, at 11:00 am at the Menlo Park City Council Chambers, 701 Laurel St.