Lauren Bird Horowitz returns home to talk about her YA book, Shattered Blue, at Kepler’s 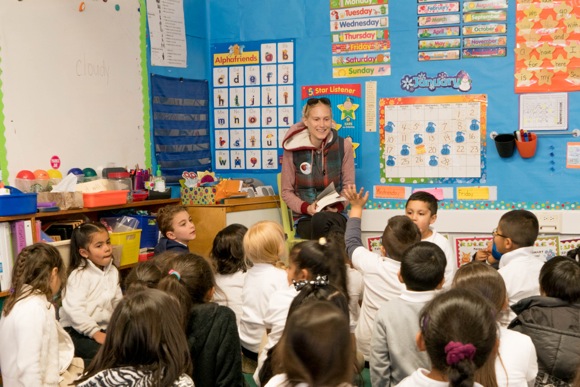 It seems particularly fitting that Lauren Bird Horowitz will be appearing at Kepler’s on March 6 in conjunction with her first book of Young Adult Fiction, Shattered Blue. It was Kepler’s, after all, that sponsored her softball team when she was growing up in Atherton.

Her interest in writing was sparked early on. Lauren, known by friends as Bird, remembers writing a small bound book as a third grader at Los Lomitas. Then while at La Entrada, she used her computer lab time to write a novel called Beaver Nut Stables.

Attending Harvard, she was mentored by author Jamaica Kincaid. “We found we were kindred spirits,” Lauren recalls. “I visited her all the time during office hours and did a one-on-one tutorial during a semester. It was the most amazingly intense writing mentorship that I could imagine.”

After graduating from Harvard, Lauren set her sights on screenplays for films and television and sold a script that was made into a movie shown on the ABC Family Channel. That got her into the Writer’s Guild, but pitches for a number of series went no where.

One thing it did do was get her into cyclical writing done from her twin home bases of Los Angeles and Kauai. “You pitch a film or series, and then there is a lot of down time,” she said. “But I need to write every single day!”

A connection at the CW channel got her in touch with Alloy Entertainment who in turn introduced  her to Amazon Skyscape, which ultimately became the publisher of Shattered Blue, which debuted last September, and is the first of a trilogy.

“It’s classified as YA because that is the age of the heroine,” explained Lauren. “But a number of people have told me it reads like an adult novel.”

There will be a special treat for young readers at Lauren’s Kepler’s appearance on March 6 at 2:00 pm. Lauren said she will be giving out free books to the first 200 high school and middle school students in attendance. She also plans to speak at a number of local schools, as she’s done a number of times before (top photo) including her alma mater, Menlo School.