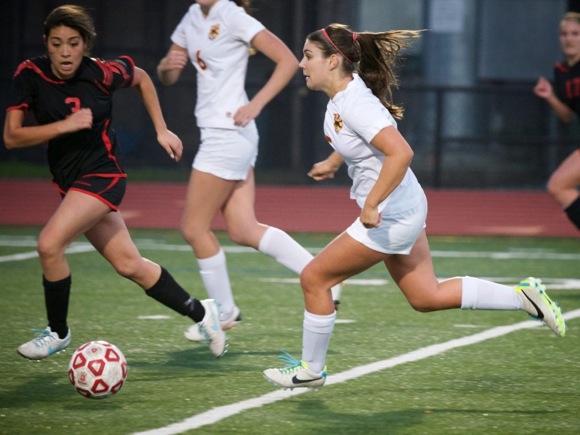 The M-A girls soccer team won its first ever CCS title on Saturday night in a torrential downpour with winds nearing 30 mph. The Bears fell behind 0-2 in the first half when the #10 seeded Branham Bruins were attacking into the fierce wind.

The Bears dominated the Bruins in the second half when it was M-A’s turn to take advantage of the wind. But they didn’t find the net until there was only 10 minutes left in the game when senior captain Sarah McLeod (pictured in earlier game) hit a free kick from around 40 yards out. Four minutes later, McLeod hit the back of the net a second time, and it was all tied up.

With less than two minutes left in regulation, and the Bears not wanting to go to overtime, sophomore Josephine Cotto hit the game winner with a strike from the left corner of the penalty box that floated over the goalkeeper’s outstretched arms.

The Bears finish the season 15-4-3, with their first CCS title ever.