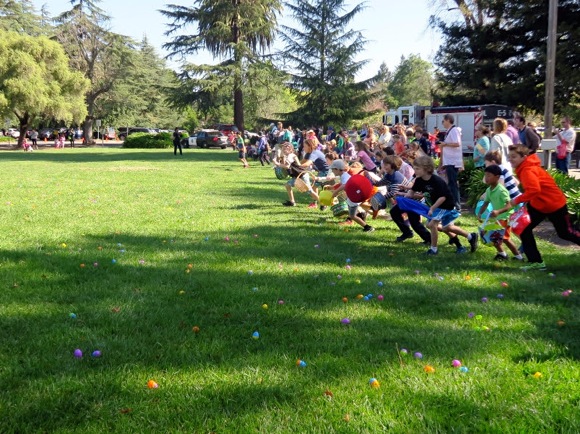 At 10:00 am, the crafts begin, the bounce houses open, jelly bean guessing competition begins, and the Bunny arrives. The egg hunts are scheduled as follows:

Please note: Children are allowed to collect four eggs and should bring their own basket or bag. Children will be given additional candy at the end of the hunt. Eggs are filled with candy and small toys which may be a choking hazard for small children.

The City of Menlo Park is hosting an additional Egg Hunt at Kelly Park. The schedule is the same as the Burgess Park event, with the addition of a magic show at 11:45 pm. Kelly Park is located behind the Onetta Harris Community Center.

In Atherton, the Friends of Holbrook-Palmer Park are also hosting an Egg Hunt at the park on Saturday. Doors open at 9:30 am and the hunts starts at 10:15 am. There are prizes for finding the three Golden Eggs. There will be face painting and ballons and an appearance by Gerald the Magician.

The cost is $10; 12 months and under free. The organizers ask that people walk or carpool as parking is limited.