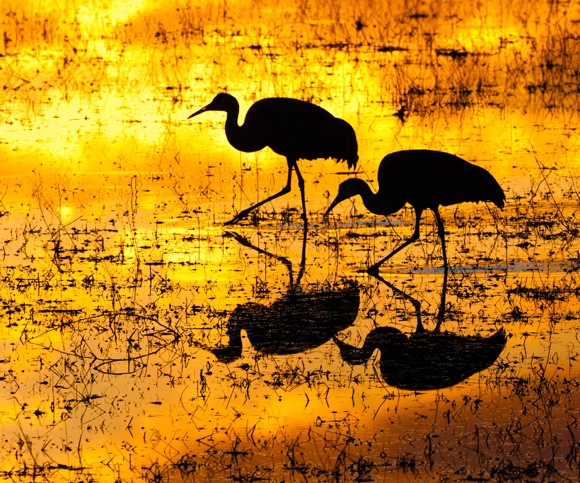 Menlo Park-based photographer Susan Carnahan‘s photos of cranes are among those on exhibit at Keeble & Shuchat from April 13 through May 11. The show is called Wildlife Beyond Borders and features the work of five other photographers and their photos of endangered animals — gorillas, polar bears, lemurs, songbirds, elephants, and wild horses.

The photographs show more than beautiful animals. The images are portraits that reveal the personality and unique traits of each individual animal and their connection to each other. These endangered species depend upon humans for their continued survival.

The exhibit is enabled by a free smartphone app, Aurasma, to enhance the viewer experience. When the viewer points their smart device at select images, a short video created by the artist starts playing. The videos contain more images and introduce the viewer to the species photographed and the environmental challenges each faces.

There will be a reception for the photographers on April 16 from 2:00 to 5:00 pm. In addition to Susan, they are Mary Aiu, Wendy Hannum, Oliver Klink, Diana Rebman, and Bruce Finocchio. Keeble & Schucat is located at 290 California St. in Palo Alto.

Photo of Sandhill cranes at dusk by Susan Carnahan