Construction has begun on a major upgrade to a unique X-ray laser at the Department of Energy’s SLAC National Accelerator Laboratory in Menlo Park. The project will add a second X-ray laser beam that’s 10,000 times brighter, on average, than the first one and fires 8,000 times faster, up to a million pulses per second.

The project, known as LCLS-II, will greatly increase the power and capacity of SLAC’s Linac Coherent Light Source (LCLS) for experiments that sharpen our view of how nature works on the atomic level and on ultrafast timescales. 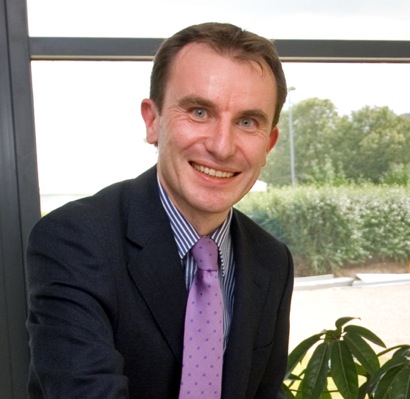 “LCLS-II will take X-ray science to the next level, opening the door to a whole new range of studies of the ultrafast and ultrasmall,” said LCLS Director Mike Dunne (picture, right). “This will tremendously advance our ability to develop transformative technologies of the future, including novel electronics, life-saving drugs and innovative energy solutions.”

Added SLAC Director Chi-Chang Kao: “Our lab has a long tradition of building and operating premier X-ray sources that help users from around the world pursue cutting-edge research in chemistry, materials science, biology and energy research. LCLS-II will keep the U.S. at the forefront of X-ray science.”

When LCLS opened six years ago as a DOE Office of Science User Facility, it was the first light source of its kind – a unique X-ray microscope that uses the brightest and fastest X-ray pulses ever made to provide unprecedented details of the atomic world.

Hundreds of scientists use LCLS each year to catch a glimpse of nature’s fundamental processes in unprecedented detail. Molecular movies reveal how chemical bonds form and break; ultrafast snapshots capture electric charges as they rapidly rearrange in materials and change their properties; and sharp 3-D images of disease-related proteins provide atomic-level details that could hold the key for discovering potential cures.

The new X-ray laser will work in parallel with the existing one, with each occupying one-third of SLAC’s two-mile-long linear accelerator tunnel. Together they will allow researchers to make observations over a wider energy range, capture detailed snapshots of rapid processes, probe delicate samples that are beyond the reach of other light sources and gather more data in less time, thus greatly increasing the number of experiments that can be performed at this pioneering facility.

Like the existing facility, LCLS-II will use electrons accelerated to nearly the speed of light to generate beams of extremely bright X-ray laser light. The electrons fly through a series of magnets, called an undulator, that forces them to travel a zigzag path and give off energy in the form of X-rays.

But the way those electrons are accelerated will be quite different, and give LCLS-II much different capabilities.

At present, electrons are accelerated down a copper pipe that operates at room temperature and allows the generation of 120 X-ray laser pulses per second.

For LCLS-II, crews will install a superconducting accelerator. It’s called “superconducting” because its niobium metal cavities conduct electricity with nearly zero loss when chilled to minus 456 degrees Fahrenheit. Accelerating electrons through a series of these cavities allows the generation of an almost continuous X-ray laser beam with pulses that are 10,000 times brighter, on average, than those of LCLS and arrive up to a million times per second.

Illustration of an electron beam traveling through a niobium cavity – a key component of SLAC’s future LCLS-II X-ray laser.