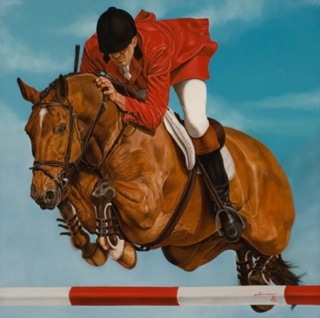 Rick Timmons of Dallas, Texas, will be the official artist of the 2016 Menlo Charity Horse Show. His artwork,  titled Cloud Jumper, is valued at $6,400 and will be auctioned off Friday night, August 12, at the Gala Dinner (sponsored by Stephen Silver Fine Jewelry) which immediately follows the $10,000 Ryman Take Your Own Line Speed Jumping Class. Reproductions of the artwork will be featured on the event’s stationery, posters, invitations, tee shirts, mugs and website.

Rick was born in Florida but was raised in Dallas where he attended Junior High and High School.  Prior to attending art school he spent four years in the construction business traveling throughout Europe, the Middle East, Canada, Mexico and all over the United States absorbing the culture of the various regions.

In 1981, after completing his studies at the Art Institute of Dallas, Rick joined the Dallas Fire Department where he would spend the next 13 years as a fire fighter/paramedic and member of the department’s football, rodeo and powerlifting teams.  Countless hours of his off-duty time were spent in his studio honing his art, and it wasn’t long before his paintings was being displayed regionally in numerous galleries which specialized in Southwestern Art.

In 1984, he made the difficult decision to retire from the fire department in order to pursue painting, his “ultimate passion” on a full time basis. He opened his first public studio in 1996.  Since then, his oil portraits and paintings have sold in the United States and Europe. Rick’s  equine and sports art has been featured in publications such as Art News, Southwest Art Magazine, and Equine Images.

He continues to operate Loco Gringo Studios in Dallas.  He will be in attendance at the horse show’s Gala Dinner on August 12th, and says, “I am really looking forward to attending this unique, equestrian event, about which I’ve heard so much.”

The Menlo Charity Horse Show will take place August 9-14 at the Menlo Circus Club, 190 Park Lane in Atherton.  Founder and Co-chair of the event, Betsy Glikbarg of Atherton says,  “We welcome Mr. Simmons’ enthusiastic participation in helping us celebrated our 46h anniversary this year.  Cloud Jumper is a powerful depiction of the strength and beauty of equestrian competition.”

Once again the event will benefit Vista Center for the Blind & Visually Impaired which serves thousands of clients in San Mateo, Santa Cruz, San Benito and Santa Clara Counties.  Over the past 5 years, the show has raised more than $1.8 million for the Center.