SLAC’s historic linac turns 50 and gets a makeover 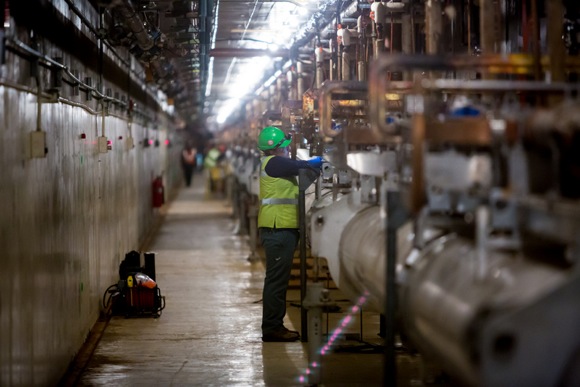 Since the Department of Energy’s SLAC National Accelerator Laboratory in Menlo Park powered up its “linac” half a century ago, the 2-mile-long particle accelerator has driven a large number of successful research programs in particle physics, accelerator development and X-ray science. Now, the historic particle highway is getting a makeover that will pave the way for more groundbreaking research.

Crews have started removing equipment from the first third of the linac (pictured above) to make room for a next-generation X-ray laser, LCLS-II, which will feature a brand new superconducting accelerator that operates at minus 456 degrees Fahrenheit. The ultracold technology will let LCLS-II fire 8,000 times faster than its predecessor, the Linac Coherent Light Source (LCLS), and generate X-ray beams that are 10,000 times brighter. 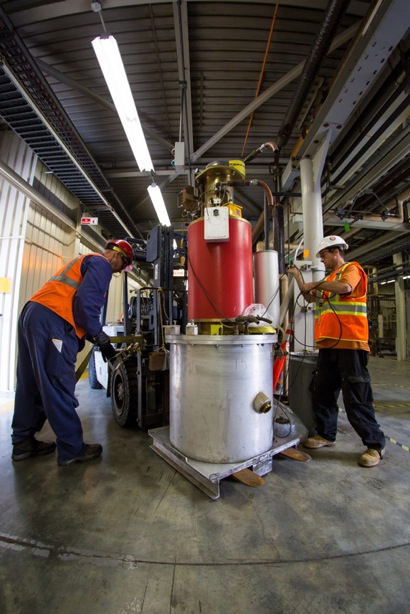 “As SLAC’s engine for discovery for the past 50 years, the linac has served a new mission every time the lab reinvented itself,” says Lia Merminga, who heads SLAC’s Accelerator Directorate. “Replacing part of the accelerator with a superconducting one is yet another historic juncture. It’s the beginning of a new era, with decades of revolutionary new science ahead of us.”

LCLS-II will operate in parallel with LCLS, which will continue to occupy the last third of the original copper linac. The accelerator’s mid-section will stay unchanged, too, and is planned to soon deliver particle beams to another proposed facility, FACET-II, for developing next-generation particle accelerator technologies.

When the linac produced its first particle beam in the early morning hours of May 21, 1966, it was the single largest civilian science project ever undertaken by the U.S. government. To this day it is the longest linear accelerator ever built.

“The linac has always been crucial for SLAC’s mission of pursuing large-scale, multidisciplinary research of national importance,” says Burton Richter, who directed the lab from 1984 to 1999. “For all these years, the pursuit of this mission has relied on people with a desire to advance science, a view of what might be possible and new ideas that may have seemed relatively crazy at the time they were brought forward.”

Caption for photo above right: As part of the Sector 0-10 Equipment Relocation Project, crews retrieve klystrons – microwave generators that boost particle energies in the copper linac – from the klystron gallery, 2016.  Both photos courtesy of SLAC National Accelerator Laboratory