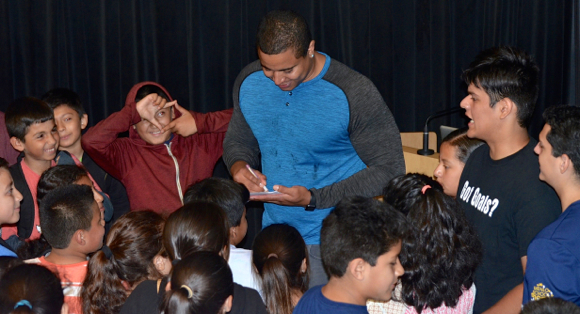 When former NFL offensive tackle Jonathan Martin attended Stanford, he acted as “Andrew Luck’s bodyguard” on the field. Though Jonathan has since retired from football, he still continues to provide support to others by discussing his struggles with bullying and mental illness.

Last week he spoke to the sixth graders in the Peninsula Bridge program at Menlo School about such struggles and reflected on the program’s theme of courage. Each summer, Peninsula Bridge’s five-week curriculum offers high-achieving students from unprivileged backgrounds a chance to learn and to grow with likeminded individuals. The program continues throughout the school year from fifth grade through college graduation, and students in it must maintain at least a 3.0 GPA. 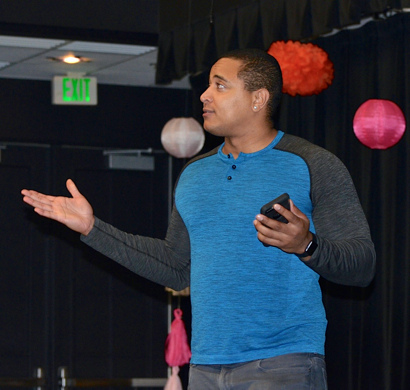 During his talk, Jonathan highlighted his experiences being bullied in both middle school and in the NFL. “I felt in-between races,” he told the students, and explained that he was bullied because he “didn’t act black.” Jonathan’s struggle with depression and anxiety augmented the impact of this teasing, and he still attends therapy.

“There’s this taboo that it’s a character flaw,” Jonathan said, but emphasized that this so-called “taboo” regarding mental illness is unwarranted. He urged the group to seek help if they are suffering, to communicate with friends, and to remember that “you can still live a long and happy life” despite such setbacks. To cope with bullying, Jonathan stressed the importance of communication with one’s parents.

In addition to advising the students on how to deal with bullying and mental illness, Jonathan encouraged them to control all the controllable aspects in their life. “I cannot stress the importance of graduating from high school and graduating from college,” he told them. “Surrounding yourself with good people also matters.”

With Peninsula Bridge, students have a jump-start achieving both of those goals: the program works to ensure that all of the participants make it through college, provides mentoring, and allows participants to work with equally motivated students.

“I want to be a better person tomorrow than I am today … and to be able to feel empathy for others,” Jonathan shared as his “truths about life.” For the students, he added that exhibiting kindness and setting tangible goals will lead to personal growth.

At the end of his talk, students were allowed to ask questions about anything ranging from how he deals with personal issues to whether or not he’s met Tom Brady. After Jonathan answered audience questions and provided his definition of courage – “not being afraid to be yourself” – students rushed down to get his autograph before running off to class.