Jaden Morgan, a 13-year-old rising freshman who will attend Bellarmine College Preparatory in San Jose this fall, had heard about SLAC’s legendary two-mile-long accelerator but had never been to the lab. This summer he had the chance to see the Department of Energy’s SLAC National Accelerator Laboratory facilities in Menlo Park up close and hear how they are used to explore the world at the level of atoms and molecules.

“I learned a lot about engineering and physics done at the accelerator, and it opened my eyes to future job opportunities in those fields,” he said. He was especially excited about science done with SLAC’s X-ray laser after touring the Linac Coherent Light Source.

Morgan was part of a group of science-curious teens who recently spent a week touring the lab, learning about careers in science and engineering, and enjoying hands-on science activities in subjects like cosmology and magnetism. Fourteen students ages 13 to 17 participated in the inaugural California Alliance of African American Educators Greene Scholars Program Summer Science Institute at SLAC, which was organized by an employee resource group known as CORE (Committee for Outreach, Recruitment & Engagement of Ethnic Minorities) in collaboration with Stanford University.

Ayodele Thomas, Greene Scholars Program director and assistant dean for diversity programs, data and technology at the Stanford School of Humanities and Sciences, emphasized the unique opportunity for Greene Scholars to spend time at a national laboratory. Students are often exposed to science, technology, engineering and mathematics (STEM) in the context of the high-tech industry, she said, so interacting with scientists who have advanced training in physics is rare. 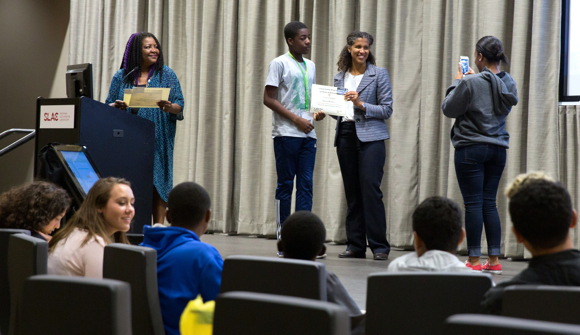 “We were all excited to come to SLAC,” Thomas said. “Many people have heard about it, but to experience it the way the students did over the course of a week is a once-in-a-lifetime opportunity.”

Greene Scholars Program Manager Gina Hendy said that while the week covered a variety of topics, a special theme was the difference between science and engineering – both strong fields at SLAC.

The CAAAE Greene Scholars Program was founded in 2001 and promotes STEM enrichment programs among African-American youth in the Bay Area. The program is named after Frank S. Greene, an early Silicon Valley tech pioneer.

Throughout the week, SLAC staff gave a variety of presentations to the students on scientific and leadership topics and assisted with lab sessions and tours. The institute culminated in presentations prepared and presented by the Greene Scholars at SLAC’s Panofsky Auditorium on a range of subjects such as “Cosmology,” “The Magnetic Kick Lab,” “Modeling X-ray Diffraction in the Classroom,” and “What is the Diameter of a Human Hair?”

Sean Kalsi, a CORE member who works on the SLAC accelerator operations team, said, “The smiles on the kids’ faces at the end of the week was proof they really enjoyed themselves during their time at the lab. Reaching out to our local communities is a critical step in ensuring we are planting the seeds necessary to help the U.S. meet the growing need for STEM workers in the future. ”