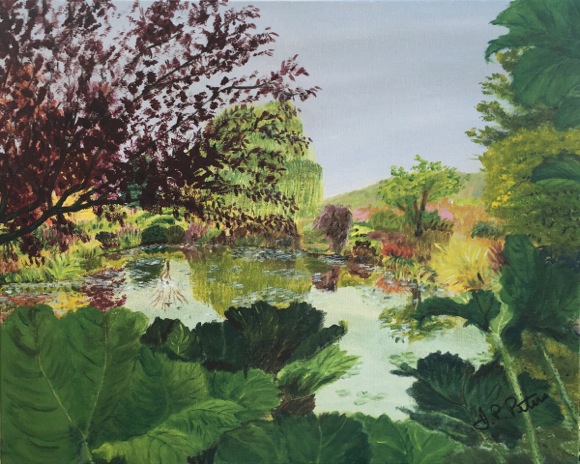 A Touch of France and Other New Works, paintings by artist Jerry Peters, are featured at the Portola Art Gallery in Menlo Park during the month of August. A reception for the artist will be held on Saturday, Aug. 6, from 1:00 to 4:00 pm.

The primary paintings in this new show are done from photos taken in October 2015 on a trip to France, including Paris and the Normandy area. Claude Monet’s magnificent gardens in Giverny, France, inspired the artist to re-create a small part of his landscape.

Jerry’s love of painting began after retiring from the fire service in 1996. He spent 30 years as a firefighter, the last 10 as a Battalion Chief in the Menlo Park Fire Protection District. His career drove his early work in acrylics, which featured fire engines, fire helmets and fire scenes.

For more than 15 years, Jerry has specialized in portraits, landscapes and still life paintings. He has a special fondness for painting old trucks in rural settings, blending the beauty of nature with the character and history of battered vehicles.

In addition to his vintage trucks, Jerry often paints from photographs taken during his travels. His work includes scenes from France, Italy, Germany, Belgium, Egypt, Greece, England and Turkey, as well as from across the USA and Canada. Throughout his artistic career, he has accepted numerous commissions for portraiture and landscapes.

The Portola Art Gallery is located within the Allied Arts (75 Arbor Rd.) in Menlo Park.