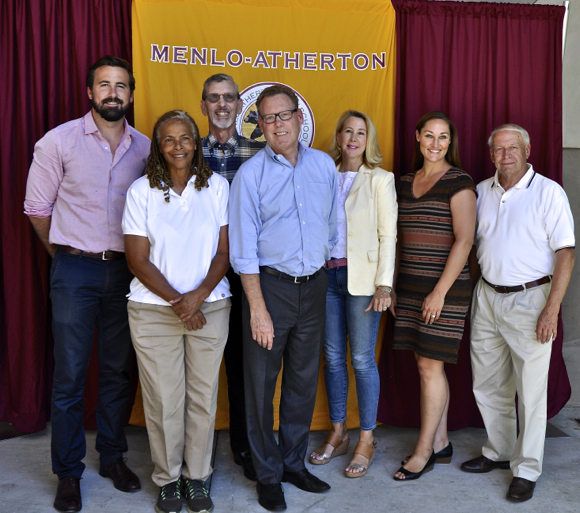 Six student athletes, three teams, one coach, and two parent volunteers make up the Menlo-Atherton High School 2016 Athletic Hall of Fame inductees, which were announced at the school on Monday, Aug. 29. They are:

Howie and Kerry Dallmar, 2001-2004 (Athletic Boosters). They were the driving force behind resurrecting the Menlo-Atherton Athletic Boosters after the organization had gone dormant for many years. Howie (Former M-A AHOF basketball player) and wife Kerry rallied the M-A community to get involved in M-A athletics, were responsible for the Boosters  gaining 501(c)3 status, and significantly increased financial support for M-A athletic programs.

Fred Decker, class of 1973 (Soccer). Fred was the goalkeeper on the 1972 and 1973 SPAL championship soccer teams. He was an All-League selection both his junior and senior years and was named the league MVP his senior year. Upon graduation, he attended UCLA and earned a starting position as a freshman “walk-on”. UCLA was the 1974 conference champion and won the western regional bracket earning a berth in the Final Four played in Miami, losing the final in double overtime, sudden death to St Louis University.

Jan Henne, Class of 1965 (Swimming). ,Jan is one of the most decorated swimmers in M-A history. In Jan’s era, there was no organized high school athletics for females so all female athletes competed for local club teams. Jan swam for the Palo Alto Swim Club for seven years and then the Santa Clara Swim Club beginning in 1968.  At the Santa Clara Swim Club, she swam with fellow M-A AHOF members Greg Buckingham and Dick Roth. After graduating from M-A, she continued swimming for Santa Clara where she qualified for the US Olympic Team.

Saana Rapakko Hunt, Class of 2004 (Golf). Saana  was a four-year letter winner in golf and two-year letter winner in swimming. Her freshman year (1999) was the first year M-A had a girls’ golf team. Finding enough girls to play was a challenge at times, resulting in M-A finishing last in the Peninsula Athletic League (PAL) during Saana’s junior year. However, during her senior year, Saana led the team to not only a first-place finish in the PAL Championship but also a first-place finish in the Central Coast Section (CCS) Championship.

TC Ostrander, Class of 2002 (football). TC played quarterback on the M-A football team in 1999-2003. In his final season, he led the Bears to their first CCS Football Championship in school history, completing 67% of 288 passes for 3059 yards, 44 touchdowns, and only 7 interceptions in 12 games. His 25 touchdown throws in seven PAL games set a new PAL record, and in his final appearance, he threw a CCS Championship Game record five touchdowns, a record 25 completions, and his 295 passing yards were only three short of the all-time record set 30 years prior.

Edwin Pech, Class of 2007 (Wrestling). Edwin wrestled all four years of his high school career.  In his junior year, he finished 4th in CCS and was a state qualifier. In his senior season, Edwin placed 2nd in CCS and went undefeated in the season.

1961 Boys Water Polo team. M-A beat all league opponents, won the Northern California Championship without a defeat, and actually beat three college teams along the way (legal in ’61). When the selections were made for the competitive South Peninsula Athletic League All League Team, M-A received unprecedented representation, having five of the seven on the first team (Jim MacKenzie, Greg Buckingham, Bob Plate, Bob Laird, and Bill Racine).

1960 Boys Track team. The M-A boys 1960 track team, coached by the late Sam Lagonia, is the only track team in M-A history to win a NCS title. Loaded with sprinters and hurdlers this team dominated the short distances in dual meet competition and went on to win the SPAL league championship, CCS sectional meet and finally the NCS team championship. By the end of the season this team had established school records that still stand to day.

1990-91 Girls Basketball team. The 1991 girls’ basketball team, coached by Pam Wimberly and assistant coaches Vicki Sullivan and James Williams, won the program’s second consecutive Central Coast Section Division II championship. The team finished in first place in the Peninsula Athletic league for the second year in a row with an 11-0 record (second year in a row undefeated) and a overall record of 19-2.