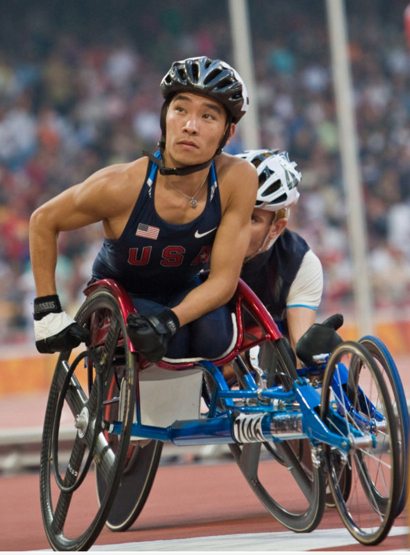 Currently in Rio competing in the Paralympics, Riekes Center staff member Steven Toyoji was introduced to adaptive sports in his home state of Washington. His athletic career developed as he began competing at the University of Arizona for the men’s wheelchair basketball team and wheelchair track and road-racing team. He represented the U.S. Paralympic Track and Field Team in numerous international competitions. including the 2008 Beijing Paralympics.

What follows is an abridged interview with him by Riekes Center marketing and communications intern Marisa Cavanna that was done prior to his learning he was headed to Rio.

What brought you to the Riekes Center?

I first came to the Riekes Center in Menlo Park when I moved here in 2011. I was looking to get more familiar with the area, the community, and the state. We had a friend here, Jackie, who played wheelchair tennis and her coach, or one of her mentors, was Sharon Kelleher who actually held my position before me, so she was in charge of all the adaptive sports here.

Jackie brought Team Toyoji to The Riekes Center. I started playing rugby with the wheelchair rugby team, and then I started working out with one of the trainers here to get back into track and just went from there.

Where do you train? How often?

So I train in Golden Gate Park; I live right across the street from there. It’s so neat there. They have Kezar Stadium, which has a really nice track. They have the polo field which is a three-quarter mile loop there. All the trails, uphill, downhill, over speeds, so there’s everything I can possibly imagine there right in my backyard.

I train six days a week, I get Mondays off so I can recover and I also do some work here at The Riekes with the PRI stuff just to make sure my body’s aligned right, fit and healthy.

What’s the most challenging?

It’s the off season. It’s putting in that work when you’re not racing. Because a) you don’t know what everyone else is doing and b) it’s hard to be putting in time especially when you have those really tough weeks when you feel like you’re hitting a wall or hitting those valleys just to be able to push through that.

It’s tough when you don’t have that tangible goal or the next race. But I’m lucky I have a good support system around me and other athletes who are in the same boat as me, and we can bounce ideas off of each other.

How do you stay motivated?

I think it’s just having those memories of past failures. I always joke that fear is my biggest motivator. The fear of not being where I want to be. Not accomplishing what I want to accomplish. That’s what keeps me going, constantly striving to be better than the last time.

What’s the most rewarding?

Seeing those results. Seeing you worked for something whether it’s medaling or making a team or hitting a time. Cause you’re always going to have those bad days, or weeks, or months where you feel like you just can’t get out of bed or you’re in a rut, and as long as you just push through it, it always kinda turns around.

What is one thing about you that is unexpected?

I’m a messy person. Any living space that I’m in will be messy. But I’m not a dirty person. I call it “organized clutter” like I always know if my stuff moves! I always look for it where I put it. If it’s not there it usually means that my wife cleaned it up and put it somewhere it’s suppose to be. But not according to me. I know if it’s supposed to be in this pile of clothes, because I left it there!