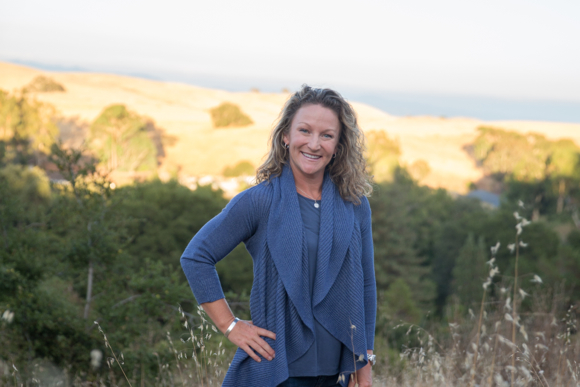 An East Coast transplant, Jen Ratay now couldn’t imagine living anywhere else but here. “I deeply love the outdoors, and this area is so beautiful,” said the Ladera resident. “People are passionate and intelligent. And there’s no better place to do social innovation work.”

The latter is key as Jen is the Executive Director of the Silicon Valley Social Venture Fund (SV2), a Peninsula-based group of more than 200 individuals who pool their resources to support innovative nonprofits and social enterprises and learn about effective giving.

Since its founding in 1998, SV2 has provided $5.2 million to 81 locally-based nonprofits. In many cases, SV2 donors, known as partners, also participate as hands-on strategic advisors or volunteers with the nonprofit groups. In August, the organization awarded $445,000 in grants and impact investments.

Jen herself was a partner for four years before assuming the role of Executive Director three years ago. Her career has always focused on public service or philanthropy. “I couldn’t image doing something day to day that didn’t have a strong mission at its core,” she said.

She cites the SV2 Board of Directors “active engagement” as one element that makes her job easier. “They are so engaged, active, and willing to roll up their sleeves and take risks.

Another is the partners themselves. “It’s been really exciting to see the energy of partners and their families coming together,” she said. “They are eager to learn what the most pressing needs here are in our own backyard — affordable housing, wages, and stable employment.”

SV2 partners actively participate each year in the grant-making process, with subgroups focused on education, the environment and internationally-oriented nonprofits, among other issue areas such as economic opportunity and at-risk youth.

SV2 welcomes inquiries from people interested in becoming partners. “People who fit in terms of values include those who are curious, humble, collaborative and have an open mind,” she said. “They’re willing to ask hard questions.

“We are about impact investing, essentially doing well by doing good, getting a social and financial return. Our partners are dedicated to making an impact, not feel-good philanthropy.”