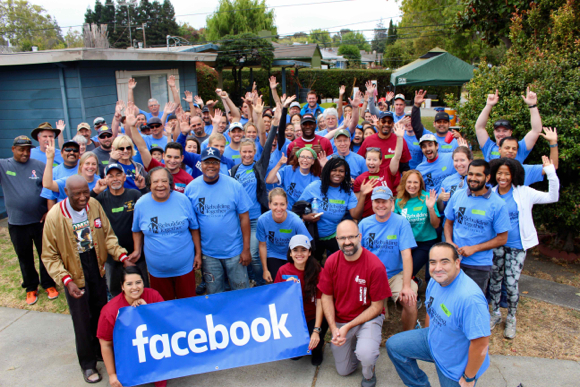 In honor of the 9/11 National Day of Service and Remembrance, Rebuilding Together Peninsula and Facebook partnered yesterday to rehabilitate three homes in the Belle Haven neighborhood of Menlo Park. Approximately 80 Facebook employees worked alongside Rebuilding Together Peninsula staff and other community members, including Menlo Park City Council member Ray Mueller (pictured below right), to create safe and healthy homes for three neighbors in need.

Duties included exterior and interior painting, debris removal, electrical upgrades, accessibility upgrades, landscaping and fence repair, grab bar and handrail installation, bathroom and kitchen improvements, fire and safety upgrades, among other repairs and modifications. These three projects are part of an additional 11 homes and two community facilities in Menlo Park and East Palo Alto that Facebook is funding to ensure Rebuilding Together Peninsula completes the health and safety repairs needed at each site. 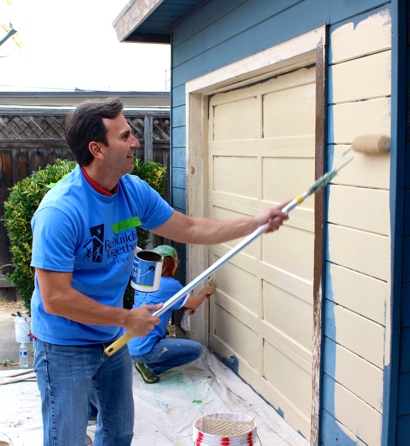 “Since arriving in Menlo Park in 2011, we’ve actively engaged with the community by supporting the preservation and enhancement of our neighborhood,” said Fergus O’Shea, Facebook Campus Facilities Director. “Alongside Rebuilding Together Peninsula, we’re able to continue that tradition through this hands-on effort that benefited three longstanding community members.”

One homeowner who was helped was 100-year-old Alberta Lee, who has been living in her home since 1962. The Facebook volunteers focused on painting the exterior of the home, yard clean up and landscaping, and repairing a side gate.

Rebuilding Together Peninsula focused on installing a new window, attic insulation, replacing the furnace, and repair the bathroom faucet. Each critical health and safety repair was focused on allowing Lee to continue living in her home and remain in the community she has been a part of for more than 50 years.

The other recipients include 84-year-old Luvenia Robinson, who has been living in her home since 1961, and Arthur and Geneva Pope, a couple in their 80s who’ve been in their home since 1951.

For 27 years Rebuilding Together Peninsula has been partnering with major Bay Area companies like Facebook to rehabilitate homes and community facilities of low-income neighbors in need and vulnerable communities. These rehabilitation projects encourage volunteerism, preserve existing affordable housing, and allow Peninsula residents to remain in the community and live affordably.

“I continue to be amazed by our partners, like Facebook, who come to the table with their time, skill, and resources on behalf of those who need it most,” said David Cattivera, executive director at Rebuilding Together Peninsula. “Projects like this make me proud to be a part of the Bay Area community.”