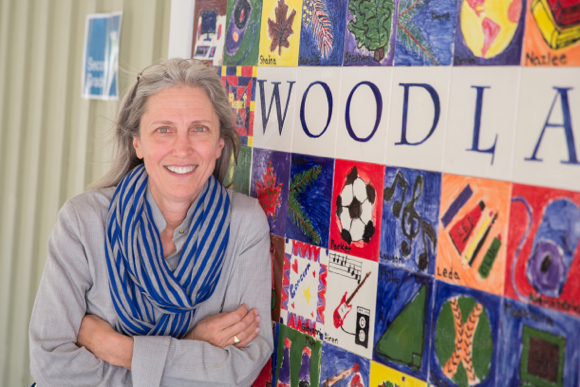 As the new head of Woodland School, an independent day school in Ladera, Marja Brandon explains, “My brain didn’t always work the way other people’s brains worked.” That led to having a difficult time in school and her brothers accusing her of “being dropped from another planet.”

She was ultimately diagnosed with three different learning disorders. She earned an undergraduate degree at Wellesley and a Master of Education from Harvard and started her journey in education that has included teaching at public and private schools as well as administrative positions.

Along the way, she realized that not only was her brain different, but every brain was different. She became frustrated with the one teacher/one way kind of  education, given all those brains in the classroom.

Then there was an added layer — understanding people’s different identities, given racial, class and other differences. She was also influenced by her Quaker upbringing with its focus on social justice.

“All of those pieces came together,” she says, “convincing me that there has to be a better way to educate children.”

In an article for Johns Hopkins School of Education, Marja explained her educational vision: “Significant brain research supports the notion that learning is best accomplished when information is presented in meaningful connected patterns. The ability to make connections, to solve problems by examining multiple perspectives, and to incorporate information from different fields will be an essential ingredient for success in the future…an integrated curriculum best prepares students for life-long learning.”

Coed Woodland School’s 285 students represent four dozen nationalities. “We tend to be on the shockingly low end of independent schools cost-wise,” she says “That’s on purpose. We have families of a broader socio-eoncomic range. I’ve inherited that, and we’d like to expand it.

“These kids are going to be future leaders. We’re here to understand and manage courageous conversations.”

Marja’s goal is “to have a joyful year.” “We’ll work together to launch Woodland onto its next chapter,” she says.