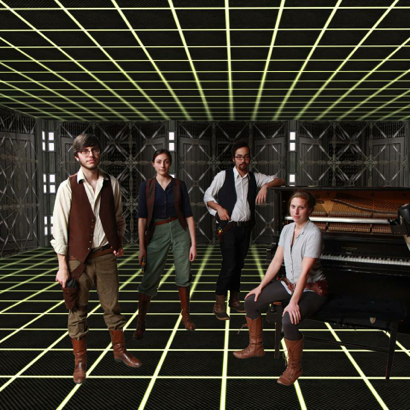 The Menlo Park Library is planning its first ever Comic Con. The event is set for Saturday, October 15 from 3:00 to 7:00 pm, and will feature live music, animation screening, seminars, artists, vendors, comic-book trading, crafts, and cosplay (the opportunity for attendees to dress up as their favorite characters).

Two different musical groups will perform. At 3:00 p.m., the Cantina Band (pictured) will perform music from movies, video games, and more. Band founder Travis W. Hendrix grew up being inspired by the iconic music from Star Wars, The Legend of Zelda, Mario Bros, and other games and films. He is joined by bandmates Annie Cilley, Kalei Yamanoha, and Juliana Frick.

At 5:00 p.m., Margaret & Kristoph will perform “The Music of J.R.R. Tolkien.” The duo Margaret Davis and Kristoph Klover are recording artists who have been performing together since 1993. Their musical settings are among the very few approved and authorized by the Tolkien Estate.

There will be two seminars led by Anna Cebrian, Founder & CEO of Illusive Comics & Games, Isle of Gamers, and Illogical Associates Publishing. At 4:00 p.m., Cebrian will talk on the topic of Women in Comics, and at 6:00 p.m., the focus will be How to Get Your Comics Published.

A special manga-drawing workshop will be held, just for youths age 10 to 18 years. Artist Karen Luk, whose work has been exhibited at the Cartoon Art Museum and Google, will teach attendees how to draw Japanese-style comics. The two-hour Manga Mania class will begin at 5:00 p. and is limited to 30 participants. Wristbands necessary for admission will be distributed at the front door of the library, on a first-come, first-served basis.

Comic Con attendees are encouraged to dress up as their favorite comic, sci-fi, or fantasy characters. Throughout the event, animation screenings will take place in the library’s downstairs program room, and comic-related crafts will be offered. Attendees can also explore a small “artist & vendor alley” of original art, books, and more. At the comic-book trading table, people who bring their own comics can trade for those displayed. There will be a limit of five trades per person.