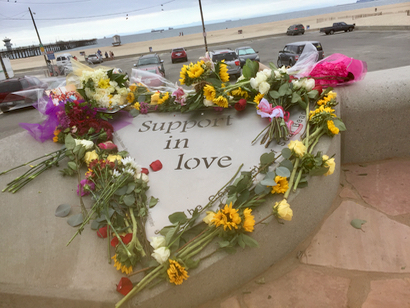 October 12th marked the fifth anniversary of the death of Michele Daschbach Fast, the Atherton native who was among eight victims of a shooting at the Salon Meritage in Seal Beach, California. Friends and family celebrated Michele’s life with a Mass at St. Ann’s Catholic Church followed by a gathering at a Memorial dedicated to the lives of all eight victims.

On October 15th, many gathered together for the fourth Michele Memorial Swim and Paddle, an annual event to remember and honor Michele, who was an avid swimmer. The swim, followed by a taco lunch, is hosted by Michele’s brother Rooney Daschbach, his wife Claire and Michele’s three children Patrick, Laura and Lisa. The event is free to all participants who are asked to make a donation to The Wounded Warrior Project.

Story and photos contributed by local members of Michele’s family