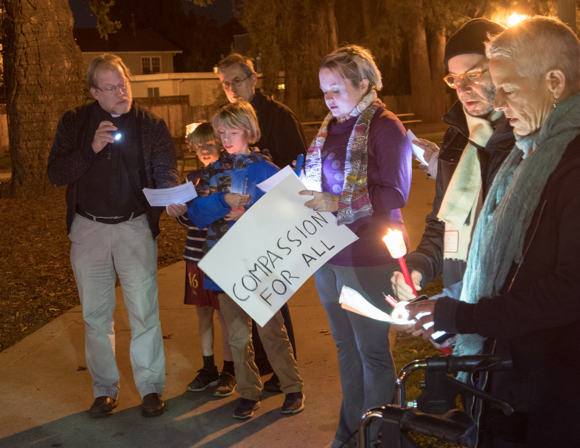 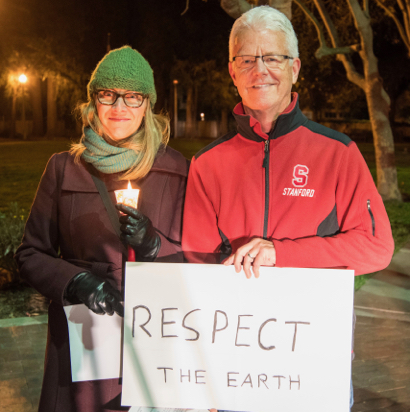 “Hate speech has become the norm, not the exception,” explained Gail. “I organized this  to show we are an inclusive community.”

The Invocation was by the Rev. Matthew Dutton-Gillett (pictured top photo, left), Rector of Trinity Church, who underscored that this was not a religious gathering but a human gathering.

“Gail asked me to begin with an Invocation,” he emailed InMenlo. “I chose to talk about how the world’s religious and humanist traditions all contain some version of the Golden Rule: Treat others as you would want to be treated. And these traditions also value justice, particularly toward those who are the most vulnerable in society.

“Recognizing that people had gathered from a number of different traditions for this vigil, I said that I didn’t want to offer a prayer, but instead, I wanted to read a poem that I thought captured both the universal value of kindness and the universal demand for justice for the vulnerable. I read a poem called A Fierce Kindness by Naomi Shahib Nye, which is posted on my blog this week .” 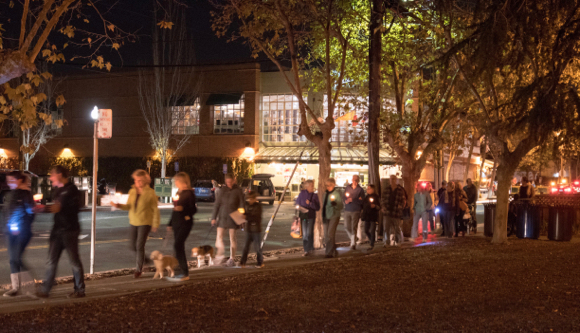 There was a moment of silence for those who were feeling particularly vulnerable or fragile, followed by singing three verses of We Shall Overcome. Those gathered then walked down University Ave towards Draegers and back, remaining at the park in conversation.

“There is hope that this vigil might become a regular occurrence, perhaps monthly,” added Matthew. “My hope is that it will involve more of the community, including a cross-section of the faith community.”

Photos by Robb Most; Timi Most contributed to this report