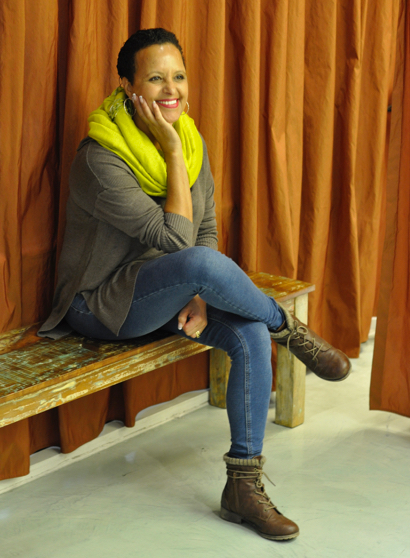 The business community of downtown Menlo Park will come together on Sunday, December 4, in support of Showa Sahle (pictured), owner of La Migliore Aveda Salon on Santa Cruz Avenue, and her non-profit, Lambadina Foundation.

A number of Menlo Park fashion and design stores will host the 2016 Designer Showcase featuring a holiday Fashion Show & Fair at the Stephen Miller Gallery on Santa Cruz Avenue. Doors open for the Fair at 4:00 pm, and the Show starts at 6:00 pm. Seating is limited, tickets cost $30, and can be purchased in advance online. All ticket proceeds go directly towards the Foundation, along with 20% of sales from the Fashion Show & Fair.

This is one of a string of similar events that Showa has held each year to raise funds to help her countrymen, but this year is special. She is announcing the official formation of her Foundation and its immediate objective to raise $50,000 to build a shelter for displaced Eritrean women wandering the streets of nearby Addis Ababa, Ethiopia. “We have called it our Brick-by-Brick campaign,” she explained. “A donation of $25 will purchase a brick to help build this shelter, and we need a total of 2,000 bricks.”

Refreshments will be served to those attending, compliments of local restaurants who support Lambadina’s cause, led by Carpaccio, whose part-owner, Ciya Martorana, plays an active role in the Lambadina Foundation.

Falilah Aisha Bilal, a community leader from San Francisco Collaborative Against Human Trafficking, will be addressing the audience at the start of the Fashion Show. Her work is centered in healing practices, empowering women and girls, youth development, and innovative thought and transformative movement.

“I want to extend my heartfelt thanks to those who are supporting me in this endeavor,” said Showa. “This is a labor of love for my beautiful country of Eritrea, which had one of the most creative communities in the world, until the lights of freedom were dimmed. We want Lambadina to play its part in helping to light those lights again,” she said.