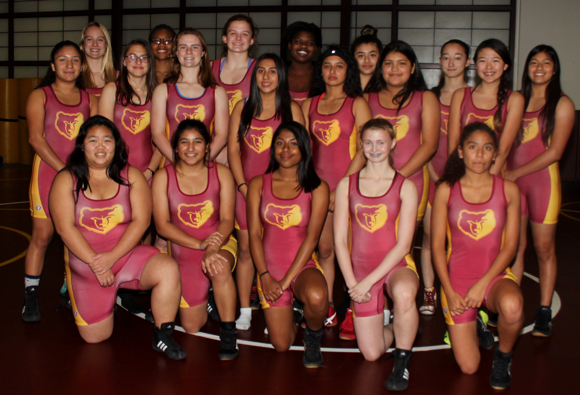 The top-ranked and growing Menlo-Atherton High School Girls’ Wrestling team will be hosting their annual tournament, “Bear Bash,” at M-A on Saturday, December 3rd from 8:00 am to 4:00 pm in Ayers Gym.

There will be 90 female wrestlers participating in the tournament from across the Bay Area. The M-A  team was recently ranked #1 in the Central Coast Section (CCS) by ccsrank.com

Emails parent Kristin McDonnell: “Coach Phil Hoang has done an amazing job growing the girls’ team very quickly from one wrestler in 2014-2015, Chelsea Wilson, to 25 girl wrestlers who are preparing for the 2016-2017 season.”

Last season, MA Girls’ Wrestling placed 11th in the state out of 200 schools, and placed 4th in the Central Coast Section.

The team has been inspired by Chelsea Wilson, the original sole member of the girls’ team, who has an incredible winning record and was named Palo Alto Weekly’s Girl Athlete of the Week in January 2016.

“This 2016-2017 season is looking even stronger,” writes Kristin, “and we invite the Menlo Park community to attend the MA Girls Wrestling Bear Bash to watch this amazing team in action.”