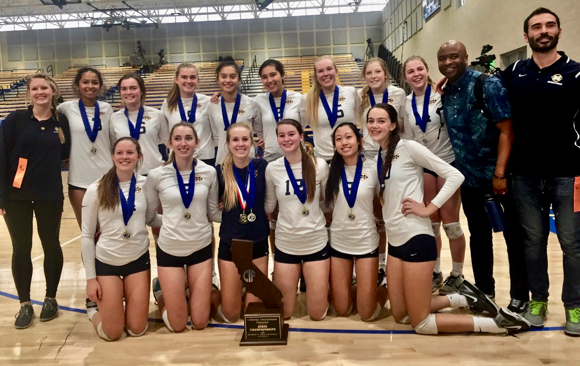 It was a year of firsts for Menlo volleyball, and on Saturday, Dec. 3., the Knights picked up the ultimate first: a state championship.

Through all the years of successful volleyball teams, this year’s team took the first CIF title in Menlo history. On the road to the state final, the Knights dropped just one set, defeating Cardinal Newman, Branson, and Monte Vista Christian. Then, they shut down Point Loma-San Diego convincingly 25-18, 25-13, 25-21 at Santiago Canyon College in Orange for the CIF Division IV title.

“They played wonderfully,” Menlo first-year coach Marco Paglialunga said. “At this age it is not easy to play right away in this type of game at this level, with the television and the (intensity) and importance of the game. But, they started and immediately were on top of every play.

“They were in the right spot on defense, they were moving correctly on the block. They really were applying everything that we practiced and talked about.”

It was also the first year at Menlo for Paglialunga, a longtime Italian National Team coach, and though he taught many high-school age players, this was his first year coaching a high school team.

Paglialunga said the Knights’ dedication — combined they missed three practices among 14 players the entire season — and receptiveness led to their success.