Microsoft hosted an Hour of Code event at the Boys and Girls Club of the Peninsula McNeil Family Clubhouse last week. More than a dozen students learned basic programming concepts and entered their own lines of code as part of a Minecraft tutorial. Menlo Park City Councilmember Ray Mueller was on hand to launch the coding session. 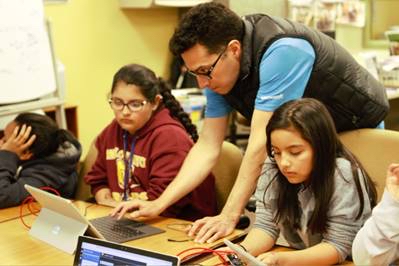 “I can’t express enough how impressed I was with the Microsoft employees who not only taught code, but personally shared their stories explaining why they love computer science with the kids at the Boys and Girls Club,” said Ray. “It was evident the Hour of Code was just the beginning, sparking an interest and feeding a desire for education in our youth. It was a fantastic thing to witness.”