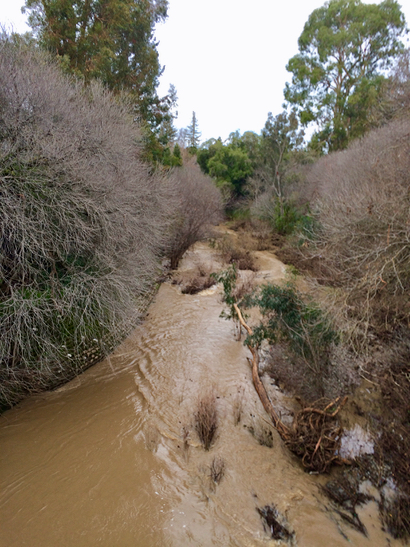 The San Francisquito Creek Joint Powers Authority (SFCJPA) is hosting a number of public meetings, including one in Menlo Park on January 18 at 6:30 pm at the Laurel School Upper Campus (275 Elliot Drive), to present initial planing of the scope of potential capital improvements along the Creek west of Highway 101.

This will be a joint scoping meeting with the U.S. Army Corps of Engineers, which is producing a Federal Environmental Impact Statement for this project.

Comments received at received at the meeting will be considered in the preparation of the environmental evaluation. In addition to attending the meeting, written comments can be sent to SFCJPA, 615-A Menlo Avenue, Menlo Park, CA 94025 or by email to comments@sfcjpa.org.

Photo of Creek taken at San Mateo Drive Bike Bridge on Jan. 11 after days of rain by Linda Hubbard