“The Diary of Anne Frank” is presented by Menlo Drama Feb. 10-12 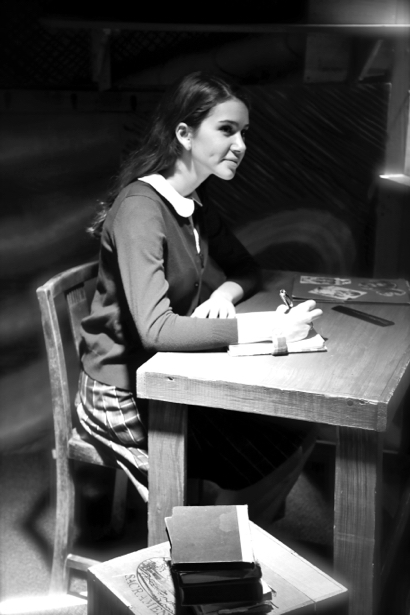 The Diary of Anne Frank, based upon the writings of young Anne Frank, detailing life-in-hiding under Nazi terror in World War II is the upcoming Menlo Drama production. Anne’s diary lent a voice to the fight for human dignity, and this adaptation brings to life one of the most important people of the 20th century, whose message is especially relevant today.

Performances run Friday, February 10 at 7:30 pm; Saturday, February 11 at 2:00 and 7:30 pm; and Sunday, February 12 at 2:00 pm in Florence Moore Auditorium at Menlo School. The community is welcome to attend; tickets at $10 for adults $5 for students and available online and at the door. Shows sell out quickly so advance purchase is encouraged. This production is appropriate for middle school and above.

Sophomore Clara Guthrie (pictured), who portrays the Anne, commented: “The story of Anne Frank is so important because it sheds light on the fact that there is a common thread between the teenage experience, no matter the circumstance. At a basic level, I have virtually nothing in common with Anne, but I feel such a strong connection to her because we are both at the same pivotal moment in our young lives.”

Anne’s vivid account of the terror and darkness of her world is also punctuated with humor, happiness and hope.  “Anne Frank is relevant today because her story is one of hope in a time where there was no hope at all,” remarked cast member Emma Dressel. “In today’s world, especially when considering the Syrian refugee crisis, we struggle to accept each other’s individuality when it is needed most.”  “

Staging his 11th performance for the Menlo Drama Department, director Steven Minning chose this production for the winter production because of the powerful medium of theatre. “For 70 years Anne’s voice has been the voice of six million vanished Jewish souls.” he said.  “At Menlo we feel that it’s vital to share her voice and further it’s relevancy in today’s world wide refugee crisis.”

In addition to his professional skills and experiences, Minning has imported another Broadway tradition to the Menlo School Drama Department, one of philanthropy. Each of the last 10 productions has been tied to a specific non-profit organization, chosen by the cast, whose work correlates to the message or themes of the production. Over $20,000 has been raised over the last three seasons, primarily from donations collected from the audience after each show. Karam Foundation, a non-profit organization serving Syrian refugee youth and their families, was chosen by the cast as the recipient of this production’s donations.