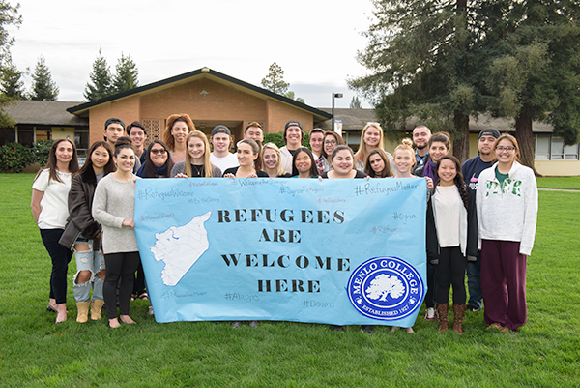 Menlo College Associate Professor Marianne Marar Yacobian and Menlo College students began raising funds and awareness for the Syrian refugee crisis in 2015. The war in Syria and the ban on immigration in America have increased the need for aid as the numbers of refugees from Syria surge.

In response to the current climate, Dr. Yacobian and the Menlo College Student Government Association are working tirelessly to raise funds and awareness for Syrian refugees by partnering with the International Rescue Committee.

Dr. Yacobian, Associate Professor of Global Studies, has ethnographic experience among refugee populations in the Middle East. Her award-winning critical ethnography research predicted both the intensification and collapse of Middle Eastern-US refugee relations. Her activism currently revolves around the restoration of refugee human rights and the dismantling of xenophobia and Islamophobia.

Dr. Yacobian is requesting that donations for Syrian Refugees be made at this online site: CROWDRISE

Founded in 1933, the International Rescue Committee (IRC) is a global leader in emergency relief, rehabilitation, protection of human rights, post-conflict development, resettlement services and advocacy for those uprooted or affected by violent conflict and oppression. The IRC is on the ground in 42 countries, providing emergency relief, relocating refugees, and rebuilding lives in the wake of disaster.

The International Rescue Committee has helped more than 3 million Syrian refugees and internally displaced people to recover and rebuild their lives, providing medical and other critical aid, ensuring refugees have access to legal counseling, and helping women and girls who are victims of violence.