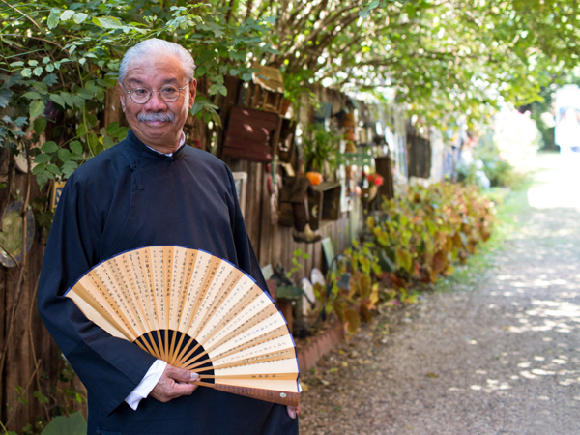 Master storyteller Charlie Chin will be sharing “Traditional Chinese Folktales in the Tea House Style” at the Menlo Park Library on Saturday, March 4, at 11:00 am,

“The Tea House style is a technique in which several stories are embedded in a ‘Story Frame,’” he explains. “This allows a continuous story that can be expanded or contracted as need be. I normally give the presentation dressed in a formal Chinese gentleman robe and use a folding fan to illustrate points of the story and the characters. For the Menlo Park Library, I would like to do a Story Frame called, ‘A Piece of Silver in a Porcelain Bowl.’”

Chin says he has shared this program at the Smithsonian Institute, as well as at the National Storytelling Festival in Jonesborough, Tennessee. The performance is suitable for adults and teens, as well as older grade-schoolers.

Master storyteller, author, historian and musician William “Charlie” Chin is a native of Jackson Heights, New York, who now lives in San Mateo. He is historian and Artist-in-Residence presenting History Alive! at the Chinese Historical Society of America in San Francisco, director of the Tai Chi Workshop at the San Mateo Buddhist Temple, and music instructor at B-Street Music in San Mateo.

Chin has presented at organizations including the American Museum of Natural History, Lincoln Center for the Performing Arts, and the Smithsonian Institution. He has also published several children’s books, including China’s Bravest Girl: The Legend of Hua Mu Lan (1992) and Clever Bird (1996); and several of his plays, A.B.C.–American Born Chinese (1983), The Last Spirit Boxer (1992) and Hawaiian Sweethearts (2001), have been produced in Boston, New York City and San Francisco.

Charlie Chin’s storytelling performance will take place  at the Menlo Park City Council Chambers, located at 701 Laurel Street. The event is free and open to the public, and no reservation is necessary to attend.