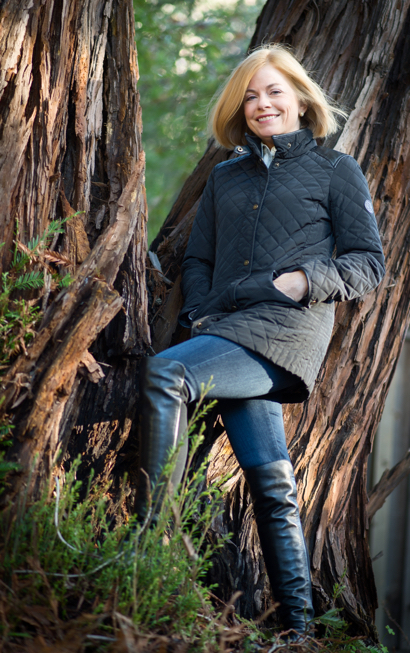 Looking back, Kim Young realizes she was too young to fully appreciate the Wallace Stegner Creative Writing Program at Stanford. “I went straight into the program after graduating from Dartmouth,” she recalls. “Most of the people were older. It was a bit intimidating.”

During her studies, which focused on poetry, she did meet writer and environmental activist Stegner, and the conservationist seed was planted. Always a nature lover, she’s now on the Board of Directors of the Peninsula Open Space Trust (POST).

We were visiting Kim to talk about the work POST has done and plans to do on the occasion of the organization’s 40th anniversary. Kim has a particularly local perspective; she grew up in Atherton, attended Menlo-Atherton High School, and still calls Atherton home.

After a career in advertising, she stopped working outside the home when her children were young, turning her considerable talents to school fundraising, such as M-A’s Big Bear Run, which she helped inaugurate. She joined the POST board in 2015, after serving on the steering committee for the organization’s Heart of the Redwoods Campaign, which achieved its $50 million fundraising goal.

“I’ve seen our population explode and watched residential and commercial buildings spring up in every direction,” she said.  “It’s such a comfort to know that POST has protected 75,000 acres of land from being developed. When I sit in traffic on 101 — or in downtown Menlo Park — I know that trails through magnificent redwood forests or along the coast will always be there for us.”

Kim explained that while many people think of POST as a land trust organization that protects open spaces, they may not know that the organization’s mission also includes helping to protect coastal farmlands, establishing wildlife corridors and maintaining trails for recreation purposes.

“POST is working hard to attract all communities on the Peninsula to enjoy our protected landscapes” she said. “We are hosting hikes for people of all ages and provide bird watching opportunities or the chance to see spectacular wildflowers. We also have a “NextGen” group that offers young people the chance to enjoy hikes and bike rides or casual barn dances far from the urban sprawl of Silicon Valley.”

The Wallace Stegner Lectures, founded by POST in 1993, features writers, thinkers and activists who explore issues related to land, nature and conservation. Past speakers have included Robert Redford, Al Gore, Alice Waters and Jimmy Chin. “Recently,  I watched 86-year-old poet Gary Snyder take the stage to talk about land conservation and to read poems that celebrate wilderness in nature and the human heart,” Kim said

The next Wallace Stegner lecture features journalist, author and former New York Times columnist Mark Bittman.  It will take place on March 21, at 8:00 pm at the Mountain View Center for Performing Arts. Tickets can be purchased online.

During her time as POST board member, Kim has come to appreciate the diversity of passions that the organization and its supporters have. “For some, it’s about preserving redwood forests,” she said. “For others, it’s coastal farms or keeping at-risk wildlife, safe. POST has something for everybody.”